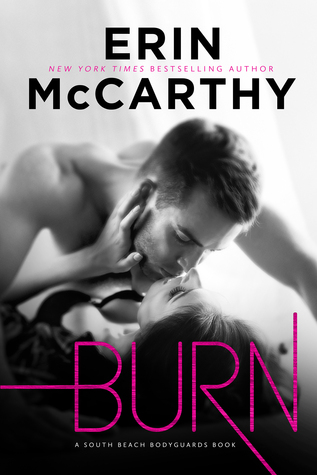 Burn is the first book in Erin McCarthy’s South Beach Bodyguards series, and it definitely was one hot quick book to read. The first chapter alone in Burn will have you like ‘whoa’ because of the characters.

Ryan Harris is a bodyguard who is about to take on a difficult job. He has to protect his former stepsister and from the moment he sees her other side, he knows he’ll have a hard time keeping his hands to himself. Isabel Rodriguez is Ryan’s former step-sister and she’s in danger for some reason. She ends up getting knocked out and not remembering who did it. She’s forced to stay with Ryan because of the danger still out there. From the moment these two end up together, Isabel is already naked and Ryan is having to protect not only Isabel from whoever hurt her, but from himself as well.

Erin McCarthy definitely wrote one scorcher, when she wrote Burn. I was a little put off at first due to characters being former stepchildren, but how they were each other definitely helped. I could tell immediately that these two wouldn’t get together quickly due to how Ryan was and how timid Isabel was, when she was sober. Don’t let the timid girl fool you though because Isabel has a whole another side and it comes out in the beginning of the story. Holy crap! That girl definitely was not timid in the beginning and Ryan was a gentleman, when it came to the first encounter with Isabel.

The drama in the story tended to be in the back burner until the very end of the book. The story more followed along with Ryan’s dilemma with Isabel and Isabel trying everything to get Ryan to see her more than a former stepsister. Ryan got on my nerves a bit in the story with the back and forth. I liked Isabel though, she was determined more than ever.

I give this book 4 stars and look forward to diving into the next book in the series. If you’re looking for a hot quick book for the winter, you should definitely purchase Burn to read.  🙂