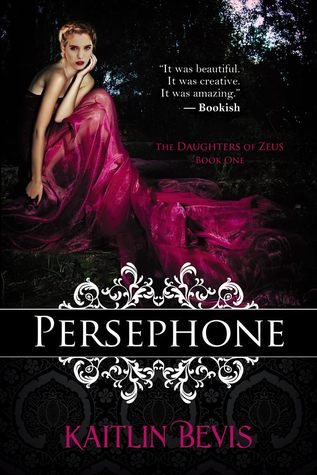 My Review
I always find at least one YA book a year that keeps me entranced…and this was definitely one of them.  I would have finished the book in one day, but having a teething baby girl who only wanted her Mama…well let’s just say reading went on hold.    Persephone or aka Kora because she rather go by her middle name, has been hearing someone call her name in the wind.  She also has been having some mysterious things happen to her.  She had her car almost blown around and a guy who came into her Mom’s store who tried everything to grab her.  He kept talking nonsense to Persephone when he was trying to grab her.  Until…her Mom finally lets her know what she really is.  She’s a Goddess and her father happens to be none other than Zeus himself.  Her best friend is also her priestess. There is only so much a girl can take, so Persephone runs away for awhile to collect her thoughts, instead…something is happening around her.  The weather is turning chilly and the ground is turning to ice.  A mysterious man walks into her life and saves her before something can really happen to her.  The man…turns out to be Hades who is the God of the Underworld.  He marks her as his bride to save her from whoever is trying to harm her.  It is up to Hades and his minions to keep Persephone safe…but in the mean time Persephone is starting to feel towards Hades and Hades is keeping something from her.  Can she really trust him? What are my thoughts on “Persephone” by Kaitlin Bevis…well…I had a hard time putting it down.  A book where there is mythology, fantasy, and mystery.  I have a weakness for the Gods and Goddesses.  Loved studying them in school…and I hope I get a chance to go back to studying them in college.   I loved Kaitlin’s writing style and how she brought the Gods and Goddesses into the modern day.   The story between Hades and Persephone is definitely a different take on what you are told as a kid, which is another reason why I loved reading this book.  I actually adored Hades in this book.   I loved how strong the character Persephone was when she was in underworld and how she helped out her friend at the end.  I was surprised to find out who was helping the bad guy though.  I was in shock when I learned it was a person that Persephone had grown to trust.   I’m really looking forward to the next book now.  =)  I can’t wait to find out what happens next.   I recommend this book to YA readers out there and readers who have a fascination with mythology.   This book will have you wanting more after you finish the last page (or in my case…my Ipad).