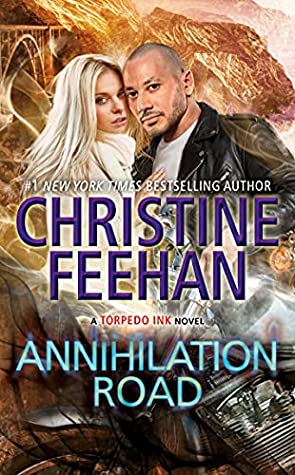 All paths lead to destruction in the new Torpedo Ink novel from #1 New York Times bestselling author Christine Feehan.
Savin "Savage" Pajari is convinced he's not worth a damn thing. He's not like his brothers. He's a sadistic monster, a killer--a man no woman could truly love. So it completely throws him when a stranger risks her life for his, pushing him out of the way and taking the hit that would have sent him six feet under. If he had any kind of sense, he'd leave her alone, but Savage can't get the woman with a smart mouth and no sense of self-preservation out of his head. With one kiss, he's lost.
Seychelle Dubois has spent her entire life not feeling much of anything, until Savage comes along and sets her whole body on fire. Kissing him was a mistake. Letting him get close would be a catastrophe. He's the most beautiful--and damaged--man she's ever met. He has a way of getting under her skin, and what he's offering is too tempting to resist.
Seychelle knows so little about Savage or the dangerous world of Torpedo Ink, but his darkness draws her like a moth to a flame. Loving him could mean losing herself completely to his needs--needs she doesn't understand but is eager to learn. But what Savage teaches her could destroy her.

Annihilation Road is the sixth novel in Christine Feehan’s Torpedo Ink series. This is Savage’s story. Readers won’t only get one book, but two books this time around for Savage and the woman he falls in love with within his book. (Don’t worry, the next book releases January 2022.)

Storyline/My Thoughts: I was a little taken aback by having two books for Savage, but after reading Annihilation Road, I was left with more questions than answers. Now, I know why Christine Feehan has two books for Savage. Savage is Reaper’s brother and the Torpedo Ink’s other Enforcer. He’s a sadistic monster who doesn’t believe a stranger risks her life for his one day. It confuses him that this woman would save him. Now, he has become intrigued by her and wants her in his life. However, he’s hesitant to let her see the real him because it may end up scaring her away.

Seychelle Dubois is trying to live her life until she saves Savage, and he won’t leave her alone. She gives him one kiss, which has him wanting her in his life permanently. The minute these two get to know each other, they realize they are complete opposites. Seychelle isn’t sure of Savage and his way of life, especially in the bedroom. Savage realizes that Seychelle may have her own abilities that may do more harm than good, especially physically and mentally.

Things I enjoyed about this book:

There is so much going on in this book that doesn’t involve only Savage and Seychelle. There is the drama of another club causing issues with Torpedo Ink.

I give this book 3.5-stars, and I look forward to reading Savage Road, which continues Seychelle’s and Savage’s story. Hopefully, these two will trust each other’s wants and needs in their relationship. Seychelle’s going to learn that Savage didn’t have an easy life growing up, so she’ll need patience. Savage will also need patience with how Seychelle handles everything in the club.

Standalone or Part of Series: It’s part of the Torpedo Ink series, but it could be read as a standalone. You’ll miss out on the previous books, though.

Would I recommend this book? Yes, if you’ve read the previous books in the Torpedo Ink series. I also recommend to Christine Feehan fans.