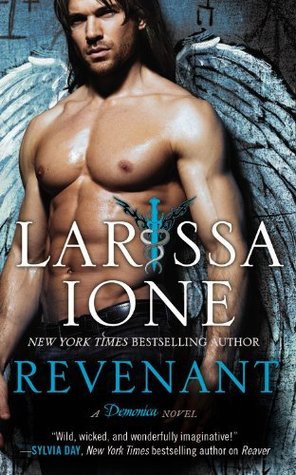 HELL HATH NO FURY . . .
For five thousand years, Revenant believed he was alone in the world, a fallen angel beyond any redemption. Now he finds he has a twin brother who had all the light and love Revenant was denied. Caught in a tug of war between Heaven and Hell, he must weigh his thirst for revenge against his desire for a mysterious female named Blaspheme—a female whose very origins could deliver him into salvation . . . or destruction.
LIKE AN ANGEL SCORNED
Blaspheme has a deadly secret: she's the forbidden offspring of an angel and a fallen angel. Hunted by both heavenly and satanic forces, she has survived only by laying low and trusting no one. When Revenant claims he can save them both, how can she possibly believe him? But the powerful angel is persistence incarnate and for Blaspheme, there's no place she can hide in Heaven or Hell where he won't find her . .

Larissa Ione ends one of my favorite (two) series (or is it really the end?) in a astonishing, hard-to-put-down way. I literally was on the edge of my bed reading Revenant when I read it last month. (Yup…writing another review late due to work taking precedence.)

First off, I was excited to read Revenant because I started this series from Larissa Ione back when I was in the Navy. Let’s just say I read these back to back to back whenever I wasn’t working in the Navy. I was waiting patiently for Larissa Ione to release the next books after I finished reading the other ones. Revenant is apart of the Lords of Deliverance and also the Demonica series because of the characters that are featured in this book. So…if you haven’t read these books in order I highly recommend it. You can read the LOTU first, but I recommend reading the Demonica series first and following along into the LOTU. You will be amazed on how Larissa Ione brings these two series together. I friggin’ adore how she flows her stories together.

Revenant and Blaspheme. These two are PERFECT together. Revenant has a soft side when it comes to Blaspheme and Blaspheme is one KICK-butt female character. She may have become one of my favorite female characters in the two series. I’ll have to do a re-read of both series to verify for sure because Larissa knows how to write characters and make me adore them right away.

Revenant has found out he has a twin brother (His twin brother got all the light from heaven) and Revenant got stuck in Hell to be abused emotionally and physically. Revenant has every right to hold a grudge against his brother, but he is going to learn the real truth on why he was stuck in Hell. (No spoilers here, you’ll have to read it to find out).

Blaspheme’s character is dealing with a lot in this book. She’s hiding a big secret and that secret could end up having her be killed. (I won’t go into the story about her because too much can be given away)

The storyline alone should have readers continuously turning the pages (or clicking through the screen on your Kindle or Nook). I’m telling you Larissa Ione tells amazing addictive stories.

There’s a bigger issue in Revenant that is addressed and ALL the characters are going to come out to help. Revenant is going to face off with his past in his present and Blaspheme is going to find out the truth about herself in this book.

There is some VERY heated scenes in Revenant between the two characters. Holy heck! You will need a cold glass of water or a cold shower (whatever your preference) when you read the tension and actual scenes in Revenant.
If you are looking for a book that is apart of an amazing series, I highly recommend Revenant. Please read an order though. You don’t want to miss out on the previous books and characters.

Is it the end though? You’ll have to read to find out. =)

I give this book 5 stars and look forward to reading much more from Larissa Ione in the future. This is the one author I automatically buy ALL her books because she is such an amazing storyteller.