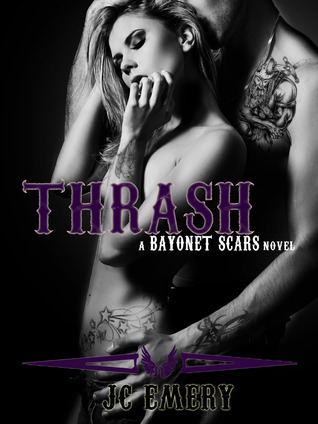 I have been waiting on pins and needles here to read Duke’s book. I did not have have a much of a connection with Ryan (aka Trigger) in Ride, but that because he was a jerk. But Duke, he caught my interest the minute he was introduced, and I have been waiting to find out who he would end up within the book. Who would tame the other bad boy of the Forsaken Motorcycle Club?

I was a little confused in the book because I did not realize that JC Emery has some of the story from the previous book in Thrash but in a different side of it. You have the secondary characters viewing what is happening from Ride in Thrash. Once I knew what she did, I actually was fascinated by how she was able to tell the same story…but not tell it repeatedly. She made sure to include just a bit of what was happening into Ride and then picks up with Duke’s dilemmas and his Old Lady’s dilemmas.

The best part of the book was the beginning. Let’s say JC Emery started off the book with a significant hot smoldering scene between the two main characters, Duke and Nicole. Be prepared for lots more to come throughout the book. (I am giving you a warning ahead of time) =)

Then JC Emery makes the characters not see each other for a while…but if you have read Ride, you will understand why those months were apart. Nicole is the main female character of the story, and you will get a chance to read everything she is going through within the story. The poor girl is trying to make ends meet taking care of her brother, while her father (stepfather) is in jail due to a being caught doing something. She has tried to forget what she did with Duke, but how can she when the man has a way of getting into a girl’s head and staying there. She had every right to go through moments of denial and trying to avoid the Club that she has been a part of for a while, but the Club is not something you run from because it owns her.

I loved Nicole’s character due to her determination of trying to stay strong even with certain situations that I feel she should have kicked some chick’s butt and kicked Duke’s butt. She proved time and time again though, she can survive, but it took her a while to know that she could.

I could go on and on about this book, but don’t want to give something away. I give this book 4 full moons and recommend it to readers out there that love hot tattooed bikers.

If you are a fan of the Sons of Anarchy well, let’s say this book and the first book is for you. You have the Forsaken Motorcycle Club that takes care of business and makes sure also to take care of their Old Ladies. Their Old Ladies even know how to handle business. Be prepared for moments of tension, romance, and suspense all in one book. =) Lots and lots of steamy romance!!!

I look forward to reading more from JC Emery and hopefully even more from the Bayonet Scars series in the very near future.