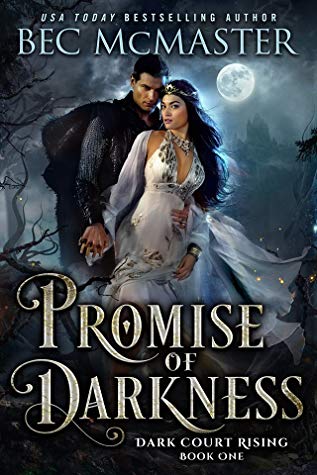 I’m so glad I read Promise of Darkness by Bec McMaster because I had a hard time putting down this book. First off, this book had me from the beginning to the end due to the storyline and characters. I loved how Bec McMaster wrote a fairy twist based on Hades and Persephone’s myth.

Princess Iskvien aka ‘Vi’ is one female protagonist who wants her mother’s love, but never receives it. She’s forced for three months to spend time with Prince of Evernight due to the treaty they have in place. Her mother Queen Adaia wants Vi to assassinate the Prince when she’s with him, but Vi won’t do it, even if she is to gain her mother’s love and trust. Vi knows that there are secrets and will fight to learn them in this story. She’s not one to run and hide. She’s there to learn the truth and knows the Prince of Evernight aka Thiago has his secret agenda with her when she’s with him. He’s very protective and generous with her and doesn’t make a move on her unless she consents to it. He’s a gentleman, but he has another side to him. Every other kingdom fears him because of his other side. Vi sees him in action when they come across one of the Unseelie Queens doing the unthinkable, and they get caught in the crossfires of some ruthless Banes (wolf-like creatures). She’s not scared of him though. She should be because she has been fed lies about him from her mother. The truth is unveiled towards the middle of the story, and it was a big shock.

I knew it was coming from how Bec McMaster wrote the story. I loved how she wrote the story in first person and Vi’s Point of View only. I felt like I was feeling her pain and love in this story. Here is a female character who only wants to be loved, and when she finds love, it’s taken away from her. There’s also the story of the Old Ones that the Seelie and Unseelie courts put away in the Underworld and they should stay there. Unfortunately, others believe the Old Ones should be resurrected. Vi is going to find out some of the Old Ones and if they indeed are evil. She will also find out a lot more in this story that I don’t want to give away.

I kept swiping my Kindle’s screen when reading this book because I had a hard time putting it down. I was intrigued by the storyline and how Bec McMaster kept me wanting more. Now I have to wait for the second book in the series, especially after what Vi had done in this book. She did the unthinkable, but she chose the unthinkable to have what she most wanted in her life. Her mother is a ruthless villain in this story, but be warned other villains in the story will make her seem very weak. I loved this story and anxiously wait for the next book. I’ve read Bec McMaster’s Steampunk Romance books, but this series may become a favorite of hers. I can’t gush enough, and I can’t wait to see where she has all the characters go next in the second book.

Standalone or part of series: Part of the Dark Court Rising series and highly recommend reading in order.
Do I recommend this book?  Yes, most definitely.
Will I read other books from the author? Yes.
Tropes/Elements: Paranormal Fantasy; Fae (Seelie/UnSeelie); Enemies-to-Lovers; Fairy Retelling of Hades and Persephone

I'm a writer. Dreamer. Travel Addict. And enthusiastic-if-not-perfect baker. I'll honestly admit that I don't always follow the recipe, be it cooking, or writing romances. If I'm not sitting in front of the computer, I'm probably plotting my next world trip. Or eating chocolate. Sometimes I run. Because...chocolate. I grew up on a steady diet of 80's fantasy movies like Ladyhawke, Labyrinth and The Princess Bride, and love creating epic, fantasy-based worlds with heroes and heroines who must defeat all the odds to have their HEA. I live in a country town in Australia, with my very own beta hero, Byron; Kobe, a dog who will eat anything (even used teabags); and demanding chickens, Siggy and Lagertha.