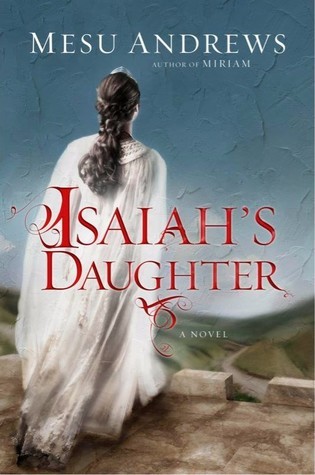 In this epic Biblical narrative, ideal for fans of The Bible miniseries, a young woman taken into the prophet Isaiah's household rises to capture the heart of the future king.
Isaiah adopts Ishma, giving her a new name--Zibah, delight of the Lord--thereby ensuring her royal pedigree. Ishma came to the prophet's home, devastated after watching her family destroyed and living as a captive. But as the years pass, Zibah's lively spirit wins Prince Hezekiah's favor, a boy determined to rebuild the kingdom his father has nearly destroyed. But loving this man will awake in her all the fears and pain of her past and she must turn to the only One who can give life, calm her fears, and deliver a nation.

I think I’ve mentioned this several times, but 2021 is the year I branched out my reading horizons. I have read a handful of books that are not the usual genre that I would consider reading in the past. This is the case with Mesu Andrews Isaiah’s Daughter, which happens to be a Biblical/Christian Fiction book. I found this book at my local library when browsing the Christian Fiction section. I was intrigued by it since it’s the story of Ishma, Isaiah, and King Hezekiah. I’m glad I found this book because now I found another genre I want to read and a new author’s book to add to my reading list.

Storyline/My Thoughts: I enjoyed Isaiah’s Daughter and reading the story of Ishma (later named Hephzibah), King Hezekiah, Isaiah, and several other biblical characters. This book may be considered fiction, but the author researched the biblical characters before writing their story, and I loved that most about this book. This book follows Ishma when she was younger as a child and then as an Israelite captive. She ends up underneath the Prophet Isaiah’s household, and he adopts her as his own daughter. Ishma ends up meeting King Hezekiah when he is younger before he becomes King, and they become close right away. I enjoyed reading Ishma’s POV with everything she went through as a child to an adult. I felt so many times for her character, especially after she married King Hezekiah and tried several times to give him an heir. It was heartbreaking what she continued to go through, but she was a fighter. She grew in her faith, and she also helped others that would give up at times. This included her husband, King Hezekiah, and when he became frustrated with Isaiah’s prophecies.

The story also is told in Hezekiah’s and Isaiah’s POV, which I enjoyed getting to read their perspective of what was going on around them. It was not easy with so many people worshiping false gods and doing things that were not found favorable to Yahweh. One of them was King Hezekiah’s father, a ruthless ruler who sacrificed his own children to false gods and did awful things. I could understand why King Hezekiah was determined not to be like his father, especially when it came to being a husband to Ishma. There were times though King Hezekiah strayed away from the prophecies shared to him by Isaiah, and his actions would later cause issues.

There are so many life lessons in this story that can be taken away, and the main one is to put your complete trust in God. Ishma, King Hezekiah, and Isaiah learn why they have to put their complete trust in God after enduring so much. I needed this reminder to always trust God, especially in today’s world. The more I let go and let God, the more I realize it’s better for me, especially when it comes to my health.

I enjoyed getting to read and know these characters. This story has several things in it that will be heartbreaking and devastating. I felt for the characters and what they endured during this time in the world. I’m glad I gave this book a chance, and I can’t wait to read more books from this author. I’ve already borrowed the next book in the Prophets and Kings series.

Overall, I give this book four stars and look forward to reading more of this genre. Thanks to my local library for introducing me to this fantastic author, Mesu Andrews, and her books.

Standalone or Part of Series: It’s part of the Prophets and Kings series, but it can be read as a standalone. 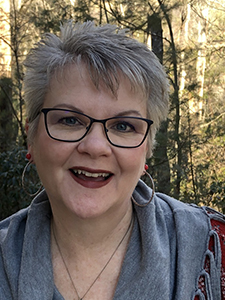 Mesu grew up with a variegated Christian heritage. With grandparents from the Pilgrim Holiness, Nazarene, and Wesleyan Churches, her dad was a Quaker and mom charismatic. As you might imagine, God was a central figure in most family discussions, but theology was a battlefield and Scripture the weapon. As a rebellious teenager, Mesu rejected God and His Word, but discovered Jesus as a life-transforming Savior through the changed life of an old friend.

The desire for God's Word exploded with her new commitment, but devotional time was scarce due to the demands of a young wife and mother. So Mesu scoured the only two theology books available--children's Bible stories and her Bible. The stories she read to her daughters at night pointed her to the Bible passages she studied all day. She became an avid student of God's Word, searching historical and cultural settings as well as ancient texts and original languages.

Mesu and her husband Roy have raised those two daughters and now enjoy a tribe of grandkids, who get to hear those same Bible stories. Mesu's love for God's Word has never waned. She now writes biblical novels, rich with spiritual insight learned through fascinating discoveries in deep historical research.

Her first novel, Love Amid the Ashes (Revell)--the story of Job and the women who loved him--won the 2012 ECPA Book of the Year in the Debut Author Category. Her subsequent novels have released with high praise, shedding light on some of the shadowy women of Scripture. Love's Sacred Song (Revell, 2012) tells the story of the beloved shepherdess in King Solomon's Song of Solomon. Love in a Broken Vessel (Revell, 2013) tells the story of Hosea and Gomer and is the final stand-alone novel in the Treasures of His Love Series. Her fourth novel, In the Shadow of Jezebel (Revell, 2014) tells the fascinating story of Queen Athaliah and the courageous Princess Jehosheba.

The Treasures of the Nile series (Waterbrook/Multnomah, 2015-16) included The Pharaoh's Daughter and Miriam and spanned Moses' life from birth to the Exodus. Her 2017 release, Isaiah's Daughter (Waterbrook/Multnomah), explores the life and ministry of the prophet Isaiah and the tumultuous days of Judah under the reigns of Ahaz and Hezekiah but focuses on the woman Hephzibah--a fascinating character in Jewish legends.

Mesu writes in their log cabin tucked away in the beautiful Appalachian Mountains. Her best friend is an American Staffordshire Terrier named Zeke, who keeps her company on long writing days. Zeke also enjoys watching movies, long walks in the woods, and sitting by the fireplace on rainy days.