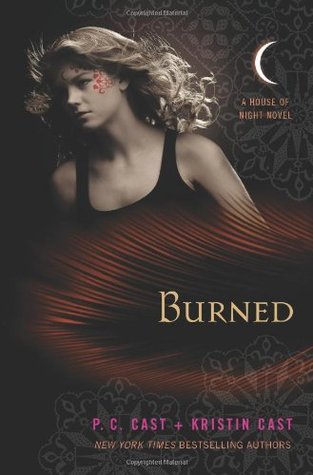 I’ve been diving back into the House of Night series by P.C. Cast and Kristin Cast since I realized I never finished reading the series. I read Burned, the seventh book in the series when it was first released in 2010. I enjoyed it the first time I read it. The second time around, I’m finding some issues with the book, and I think it’s due to me being older. Yup, I’m older, and I noticed my love of the Young Adult genre had changed a bit. That doesn’t mean I don’t like this series by the fabulous P.C. Cast and Kristin Cast.

Storyline/My Thoughts: If you haven’t read the previous six books in the series, I would recommend not reading my review on Burned. I may end up spoiling something that happened from the earlier books. However, I try not to in my reviews.

The book picks up from the previous book where Zoey has had her soul shatter in pieces after what happens to Heath. Kalona kills Heath in front of Zoey, and it breaks her. It’s going to be a mission for Zoey’s friends to get her back from the Otherworld, but it’s not going to be easy. They also have a time limit, so they do everything they can to get Zoey back.

What I enjoyed from this book:

Overall, this time around, this book receives 3.5 stars from me. I liked it but didn’t enjoy it the first time I read it. I’m older now, and my reading tastes have changed a bit. I do plan on finishing my re-read and finally finishing this series, but I’m doing it slowly.

Would I recommend this book? Yes. I recommend it to the readers that have already dived into the previous books in the House of Night series. I do recommend it to young adults/older teens that enjoy YA Paranormal/Fantasy. There is cursing in this book—more than usual. Since I was in the U.S. Navy, I can handle cursing, but some readers may not enjoy it in a YA/Teen book.