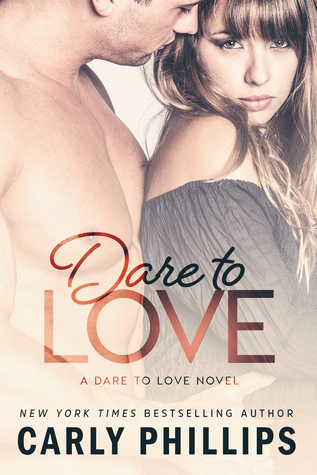 She arouses his dominant and protective instincts And he will do anything to possess her … And does.
When billionaire Ian Dare gets one glimpse of the sensual and irresistible Riley Taylor, he knows that he must have her. But any future he might have with Riley means he'll have to confront his past — a past he'd rather forget. And that's something this NFL team owner won't dare to do — not even for love.

Dare to Love is the first book in Carly Phillips Dare to Love series, and this is the first book I’ve ever read from her. I have seen her books everywhere on my Goodreads feed or Amazon sending me recommendations on Carly’s books in my email. Now I have finally listened to this recommendations and found yet another author I need to stalk (I mean by her books and read them like a mad woman). =)

Dare to Love is with Ian and Riley and these two are a scorching hot couple that is perfect for each other. (at least I thought they were) These two though have some serious family issues, but with those issues, they can help each other out in the long run. Ian has his family drama that he has been dealing with for a while. He has his reasons though, and I felt sympathetic for him. His father was married to his mother but had a second family that he was with more. If there is anything that bothers me is when there is infidelity, and with Robert Dare (Ian’s father) I wanted to slap him for Ian. There is a particular scene in the book that I feel made me hate Robert even more, and I feel he could have done more to apologize…but yeah…I won’t get into further detail about it. (Let’s say I didn’t like Robert much.). I agree with Ian wanting to stay away from his father but felt he could have opened his heart/mind to his half-siblings. In Dare to Love you will read a bit of the spiff between some of the siblings, but not all of them. The minute Ian meets Riley at a party though, he is about to face not only his family drama head-on, but he will change his mind about relationships altogether. Ian is the typical player who doesn’t do relationships, but oh boy Carly gave him a match that made him become a whole different person.

Riley is a very independent woman, and she has known her best friend Alex (who is Ian’s half-brother) for a very long time. The minute she spies Ian staring at her, she’s intrigued by the sexy guy. It all doesn’t help when they first meet and share a very spicy kiss. (Yup, Carly kicks off the romance early and it’s HOT!) Riley has no idea who he is until they talk to each other and that is when the drama starts. (Ummm…let’s say Alex is not happy about it) Riley has her secrets though of her past that she is still dealing with in her life. The poor girl had it tough, and I wanted to hug her. Carly wrote a character who went something in her life that she continuously struggled with, and she had trusts issues with everyone she had in her life. She had her reasons though, which made me feel for her. Although, I did find myself saying WTF to her at one part of the book when she didn’t ask for help. The poor girl she needed someone in her life to wake her up and help her.

The smexiness in the book was beyond scorching. Ian is your controlling guy in the bedroom, and he likes to involve ties and making sure the woman gets to pleasured before he does. (Doesn’t that want to make you want to read the book?) =) Riley is one lucky gal…let’s say that.

Carly writes characters that are meant to meet each other and help each other conquer their problems. There is another drama that occurs in the story instead of just what Ian and Riley are dealing with too. (but no spoilers from this mama) Carly introduces us to every Dare sibling in the book, and I’m intrigued to find out more about them. Alex especially since he played a significant role in Dare to Love. He was a pain at times, but at the end, I wanted to know who is the female that will win him over. Although, I do have a clue who will. Let’s say Alex is not happy that someone doesn’t find him irresistible like every other female out there. I love characters that make it hard for other characters. LOL

Every time I had to get something done around the house and leave to run errands, I made sure to take my Kindle or phone with me to read Dare to Love. Carly had me hooked from the very first page while reading this book.

I look forward to reading the rest of the books in the series and also checking all the other books she has written.

I give this book 4 full moons and highly recommend it to contemporary romance readers out there.