Harry Potter and the Sorcerer's Stone

"Turning the envelope over, his hand trembling, Harry saw a purple wax seal bearing a coat of arms; a lion, an eagle, a badger and a snake surrounding a large letter 'H'."
Harry Potter has never even heard of Hogwarts when the letters start dropping on the doormat at number four, Privet Drive. Addressed in green ink on yellowish parchment with a purple seal, they are swiftly confiscated by his grisly aunt and uncle. Then, on Harry's eleventh birthday, a great beetle-eyed giant of a man called Rubeus Hagrid bursts in with some astonishing news: Harry Potter is a wizard, and he has a place at Hogwarts School of Witchcraft and Wizardry. An incredible adventure is about to begin!

I’m going to try to keep this review short. Yes, this is the first time I’ve read the first book in the Harry Potter series or any of the books in the series. Why may you ask? I can’t read a book if I’ve already seen the movie. It’s a pet peeve of mind. I prefer to read the book and then see the film. Unfortunately, I wasn’t into reading Harry Potter when it came out. I was reading Anne Rice when J.K. Rowling released the first book. I hope to one day read ALL the books in the Harry Potter series, but as of right now, I’m glad I read/listened to the first book. All thanks to the #Romanceopoly2020 Challenge. 🙂

I will say this the book is better than the movie because there was so much left out in the film. Some scenes were changed too. Don’t get me wrong, and I still enjoyed the movie. I end up re-watching them over and over again every year. After reading the book, though, I love Hagrid’s character even more because he reminds me of a giant protective teddy bear. There’s also Hermione Granger, who’s smart, resourceful, and a fellow bookworm. She’s always been a favorite character of mine in the movie and now in the book.

I also realized that the Dursley’s are worst in the book too. I couldn’t stand them in the movie, and J.K. Rowling made me despise them more in the book. I thought that wasn’t possible. Don’t even get me started with Draco Malfoy. He may be cute in the movie, but he’s awful as a person in the book. Grrr!

The book does follow the storyline of Harry Potter, finding out he’s a wizard and learning about what happened to his parents. He’s learning his way in the wizarding world with the help of his new friends. Unfortunately, he’s a young boy dealing with a lot in this book. The biggest issue is the enemy that killed his parents is not dead.

I loved the world J.K. Rowling created and wished I would’ve read these books when they originally came out. Hopefully, soon, I can read the rest of the books. Maybe I can have both of my daughters read them with me. I don’t see my teenager reading them right now, but possibly my youngest daughter. She’s all about Harry Potter after seeing the movies. My oldest daughter is busy with softball and soccer.

Overall, the first book in the Harry Potter series gets ‘5-stars,’ and I need to find time to read the rest of the books. I love this world. 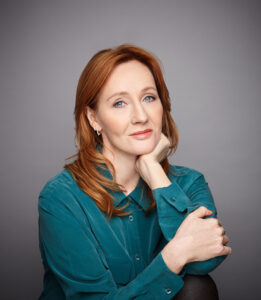 Although she writes under the pen name J.K. Rowling, pronounced like rolling, her name when her first Harry Potter book was published was simply Joanne Rowling. Anticipating that the target audience of young boys might not want to read a book written by a woman, her publishers demanded that she use two initials, rather than her full name. As she had no middle name, she chose K as the second initial of her pen name, from her paternal grandmother Kathleen Ada Bulgen Rowling. She calls herself Jo and has said, "No one ever called me 'Joanne' when I was young, unless they were angry." Following her marriage, she has sometimes used the name Joanne Murray when conducting personal business. During the Leveson Inquiry she gave evidence under the name of Joanne Kathleen Rowling. In a 2012 interview, Rowling noted that she no longer cared that people pronounced her name incorrectly.

Rowling was born to Peter James Rowling, a Rolls-Royce aircraft engineer, and Anne Rowling (née Volant), on 31 July 1965 in Yate, Gloucestershire, England, 10 miles (16 km) northeast of Bristol. Her mother Anne was half-French and half-Scottish. Her parents first met on a train departing from King's Cross Station bound for Arbroath in 1964. They married on 14 March 1965. Her mother's maternal grandfather, Dugald Campbell, was born in Lamlash on the Isle of Arran. Her mother's paternal grandfather, Louis Volant, was awarded the Croix de Guerre for exceptional bravery in defending the village of Courcelles-le-Comte during the First World War.

Rowling's sister Dianne was born at their home when Rowling was 23 months old. The family moved to the nearby village Winterbourne when Rowling was four. She attended St Michael's Primary School, a school founded by abolitionist William Wilberforce and education reformer Hannah More. Her headmaster at St Michael's, Alfred Dunn, has been suggested as the inspiration for the Harry Potter headmaster Albus Dumbledore.

As a child, Rowling often wrote fantasy stories, which she would usually then read to her sister. She recalls that: "I can still remember me telling her a story in which she fell down a rabbit hole and was fed strawberries by the rabbit family inside it. Certainly the first story I ever wrote down (when I was five or six) was about a rabbit called Rabbit. He got the measles and was visited by his friends, including a giant bee called Miss Bee." At the age of nine, Rowling moved to Church Cottage in the Gloucestershire village of Tutshill, close to Chepstow, Wales. When she was a young teenager, her great aunt, who Rowling said "taught classics and approved of a thirst for knowledge, even of a questionable kind," gave her a very old copy of Jessica Mitford's autobiography, Hons and Rebels. Mitford became Rowling's heroine, and Rowling subsequently read all of her books.

Rowling has said of her teenage years, in an interview with The New Yorker, "I wasn’t particularly happy. I think it’s a dreadful time of life." She had a difficult homelife; her mother was ill and she had a difficult relationship with her father (she is no longer on speaking terms with him). She attended secondary school at Wyedean School and College, where her mother had worked as a technician in the science department. Rowling said of her adolescence, "Hermione [a bookish, know-it-all Harry Potter character] is loosely based on me. She's a caricature of me when I was eleven, which I'm not particularly proud of." Steve Eddy, who taught Rowling English when she first arrived, remembers her as "not exceptional" but "one of a group of girls who were bright, and quite good at English." Sean Harris, her best friend in the Upper Sixth owned a turquoise Ford Anglia, which she says inspired the one in her books.