Review: ‘Meant to Be’ by Karen Stivali 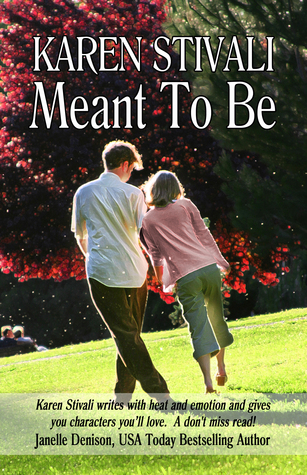 (Women's Fiction) Sometimes you’re already committed to the wrong person when fate finally brings you the right one.
When NYU professor Daniel Gardner’s career-obsessed wife convinces him to move to the suburbs, he hopes it’s a first step toward starting the family he longs to have. Instead of domestic bliss he finds his neighbor, Marienne Valeti. She loves her freelance design job, but must contend with a growing sense of isolation created by her husband’s indifference. A penchant for good books, bad movies, and Marienne’s to-die-for brownies sparks a powerful bond between them. Passion simmers, but they resist its lure, surrendering only in the seclusion of their minds. Their friendship helps them weather every hardship, from divorce to widowhood, leaving them both secretly wondering if it can survive a first kiss.

My first book from the fabulous author, Karen Stivali, and now I cannot wait to read her other books.
“Meant to Be” is a definite page-turner and will have you are rooting for Daniel and Marienne to be with each other.  =)

Daniel is a Professor at NYU and his wife, Justine, who is about to open her Spa has him move to the suburbs where he hopes to start a family finally.
When Daniel is not working as a professor, he volunteers at the local theater where he meets up with his neighbor Marienne.  He already knows her husband, Frank, who he rides with to work every weekday on the rail.  He has meant to meet Marienne since they moved in behind Daniel.  They automatically become close friends and decide to have Friday nights as couples nights, where Marienne and Frank have Daniel and his wife over and vice versa.  In the meantime though, Daniel is trying to hide his feelings for Marienne every time he sees her, and Marienne is trying to protect her feelings for Daniel.  They have come to realize they both have so much more in common and that they were most likely meant to each other, especially when Daniel finds out Marienne has pictures of him from his past.
Marienne finds out the truth on how Daniel met his wife, and she thinks it is wrong what Justine did and continuously does to Daniel.  Daniel does not even realize the real truth on how Justine met him and what her real intentions were.
Daniel realizes a truth about Justine, when Marienne has the best miracle happen to her and Daniel is starting to realize he may never have what Frank and Marienne have.  Until Daniel finds out the truth about what Frank is doing to Marienne behind her back, he will still be in the dark.

“Meant to Be” is about two people who were meant to meet each other, but they have to reach the wrong person first before they can achieve their actual match.  Daniel and Marienne were expected to be together especially when they start sharing stories of the past.
Karen did a great job with this story and how true love will find itself eventually.  I thought “Meant to Be” was such a sweet story and I fell in love with the character Daniel as soon as he was introduced.  He helped Marienne so much, even more than her husband, Frank, who was such a jerk to her.  Justine was just as wrong to Daniel, but she had a back story to why she hooked up with Daniel in the first place, and that made me hate her even more.
I had such a hard time putting down this book because I wanted to find out what would happen next to Daniel and Marienne.
I was so mad on what Frank was doing to Marienne when the truth came out at the end, and I was happy with what finally happened at the ending.
I definitely cannot wait to read the next installment to Daniel and Marienne’s story now, and I look forward to reading other books from Karen Stivali as well.
This book may make you mad on the significant others of Daniel and Marienne, but you’ll want to know if Daniel and Marienne eventually get their happily ever after, especially with what they ordeal in this book.
I recommend this book to contemporary romance readers out there.
You’ll fall in love with Daniel’s sweet British ways and also fall in love Marienne’s character as well.  Just a warning, this book may make you hungry for cakes, cookies, etc.  Marienne’s character bakes and cooks a lot, and she had me wanting to bake after I finished this book.  =)