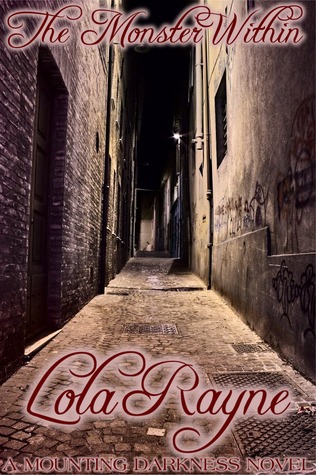 My Review
“The Monster Within” is the first book from Lola Rayne, and after reading it, I’m ready for the second book already. Nicole Jone’s for years has been having a great life, trying to forget about her past, until one day, she gets a call from her worst nightmare.  Someone she thought was dead is now out to get here. She’s all upset about it, and when she tries to go home the same day, she ends up passing out in front of a stranger, she thought could be the person who wants her.  Instead, it is just someone she bumped into by accident, and he was following her to make she was not in danger and to keep an eye on her. Gideon never thought he would run into his beautiful woman and follow her.  When she passes out in front of him, she knows something is wrong with her, so he takes her home to keep her safe. Gideon is not your normal person though because inside of him, is a monster that wants to claim Nicole as his and keep her safe with him.  He knows that Nicole is his mate and his other self recognized her from the beginning when he followed her.  He is determined to find out what made Nicole all upset that day she passed out in front him, and he will do anything to protect her. What Gideon does not realize though is, he will have to protect himself as well, when it comes to Nicole’s past coming back to haunt her. My thoughts on “Monster Within” was it was a great start to Lola Rayne’s Mounting Darkness Series.  The characters she created had great chemistry, and I was able to click with them very well. Nicole kicked butt and Gideon scared the crap out of me when I found out what he was and what he was made to do. There were some very steamy, erotic moments between Nicole and Gideon in the book, so be prepared to take a cold shower maybe afterward.  (Yes Lola wrote some sexy, steamy scenes) It was a short novella and only had touched a little bit, and I felt it could have been more…but in the end, I was pleased with what happened. Lola did leave me hanging at the end.  I want to know what will happen next, especially since Nicole and Gideon found out something else that I’m curious about in the story. I recommend this book to paranormal romance readers out there and for readers who love reading short novellas. “The Monster Within” definitely was a great start to one amazing, sexy, paranormal romance series.