ARC Review: ‘A Shot of Sin’ by Eden Summers 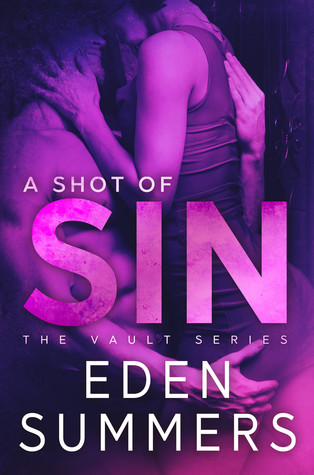 A Shot of Sin

Throw back a shot of pure sin.

Leo Petrova has a dirty secret that’s about to get blown wide open. The exclusive VIP area hidden beneath his night club, Shot of Sin, is short staffed a bartender. The only available replacement is Shay—his temptation, his distraction—the sole woman he refuses to escort down the secret staircase. She has no clue about the private adult club that lies beneath her feet and he’d prefer to keep it that way. The Vault of Sin is the only place he can let his sexual proclivities run wild and he’s learned the hard way that Shay is too virtuous to be comfortable in the erotic environment.
Shay Porter is curious as to why her boss, the king of mixed messages, seems almost desperate to keep her from discovering what’s on the other side of the guarded door at the back of the building. But she’s never backed down from a challenge before. Sliding into Leo’s arms and this new world of carnal exploration is addictive yet frightening. She could lose her job, her self-respect, and her heart.
Exposing a vanilla woman to a sorbet lifestyle isn’t something Leo’s business partners approve of. Secrets are at stake. Friendships, too. And through it all, neither one of them can ignore the wicked taste of sin threatening to tear it all apart.

Warning: This sex club does not carry the government’s stamp of approval. Contains devilish debauchery, delightful deviance, and dancing on the edge of the darkest of sexual desires.

Please note: This book was previously released by Samhain Publishing. This new edition contains a few slight tweaks as well as a new setting for the series.

A Shot of Sin is the first book in Eden Summer Vault of Sin series, and it was one book I had a hard time putting down. I read this book in one day because it sucked me in from the first chapter. It’s all because the men Eden writes into her stories. I couldn’t leave Leo, T.J., and Brute hanging. I had to finish A Shot of Sin, so I could know for sure that Leo was going to get the girl and find out more about the sexy men that run Shot of Sin (nightclub) together.

Eden Summers starts up this addicting book with two characters who have some serious sexual tension between each other. =) Shay Porter is the bar manager of Leo Petrova’s nightclub Shot of Sin, and Leo’s two best friends (who are owners to the nightclub) want Shay to bartend the bar downstairs in their secret club. Leo is ALL against it. He doesn’t think Shay can handle what is happening downstairs in Leo’s secret club. He also has trust issues with her going down there since this club is not a legal club. Leo’s best friends believe she can handle it, but they are worried about what could happen if she hooks up with Leo. Let’s say be prepared for some very intense, seductive scenes between Leo and Shay. Holy crap! It’s been a while since I finished A Shot of Sin and I still can’t get over the scenes. (Eden knows how to keep you thinking about the book after you’ve read it)

A Shot of Sin is going to get you out of your comfort zone a bit and bring on the heat. I loved every bit of Shay and Leo together. (Sorry, won’t get into details because I don’t want to give it away) Leo is going to change Shay a bit, and Shay is going to change Leo too. =)

I’m anxious to read T.J. and Brute’s stories next because these two won me over in A Shot of Sin. I need more of these guys already. Ahhh!

Until the next book is released, I’m going to re-read A Shot of Sin again and again because I can’t get enough of this series so far. I also gotta keep getting my Leo fix. =) I LOVE him!