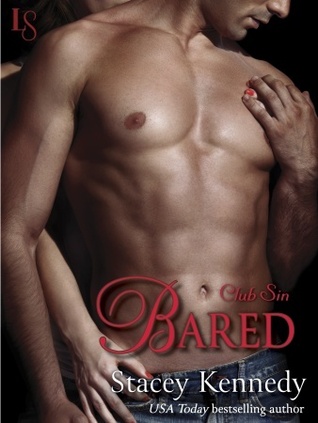 Stacey gives us Aidan and Cora’s story, and they are one hot couple together. Aidan is the sexy lawyer by day and Club Sin Master at night. His submissive for two years now has always been Cora, but he has made no move to collar Cora. Aidan is still dealing with his past with another submissive he had. He is having a hard time getting over her and what happened to her. He’s afraid to feel for another submissive like he did in the past.

Cora is the social services counselor by day and submissive to Aidan by night. She keeps both her job and her pleasure from intertwining together. None of her co-workers know of her thrills that she has with Aidan. They assume she goes out with the girls at night, but Cora has known she has loved the BDSM lifestyle since before Club Sin. She had another Dom before, and now he is more of a best friend. Porter was always there for her, and her past with Porter is going to creep up, due to what is going to occur with her and Aidan.

Aidan in Bared is going to play the “I don’t know” card, and he’s worried because Cora is shutting down on him in Bared. I swear he was clueless. There were times I wanted to go through the book and smack him around. Wake up, Aidan….Grrrr!!! He’s a dang lawyer shouldn’t he figure out what is going on right away. Geez LOL, He did show his dominant ways though, which made me forget all his crazy foolishness at times.

Cora was annoying at times as well. She drove me crazy about not sharing what she felt. I wanted to smack her around. Another GRRRRR moment!!!!

Between Aidan and Cora going back and forth with each other and one particular scene, where Aidan stops what he is doing with Cora. Let’s say, I screamed at them. You foolish characters who drove me crazy, but Stacey managed to redeem my love for them at the end. Aidan won me over at the end of the book. I’ll leave it at that because I don’t want to spoil it.

Whenever these two characters got together though…it was like the room I was in was heating up whenever I read their sex scenes together. Aidan and Cora had some serious HOT chemistry. Could they not see and feel it? (Must remind me they are fictional)

I’m looking forward to Kyler’s book next. He won me over in Bared. He put Aidan in his place in certain parts of the books. Oh yes, …he showed he is a Dom for a reason. LOVE him!!!