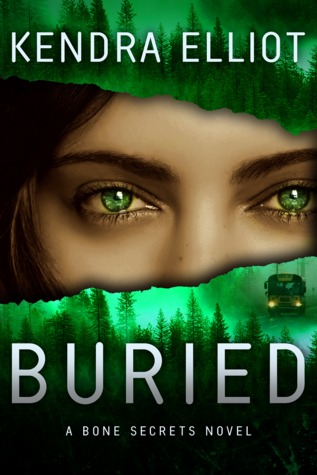 Reporter Michael Brody is used to getting answers. The one that’s eluded him, though, for twenty long years is learning what happened to his brother Daniel the day his school bus disappeared. When the remains of the other children are discovered—and Daniel’s aren’t among them—a desperate Michael calls upon the sole survivor of the tragedy, Chris Jacobs, hoping he will finally break his silence.
Constant fear of being found by his kidnapper has driven Chris into hiding. The only lead Michael has is Chris’s sister, Jamie. Strong and impenetrable, she’s capable of burrowing deep into Michael’s heart. As they race to find Chris, Michael and Jamie somehow find each other among the decades of wreckage. But locating Chris may not be so easy. Now grown, his scars go far deeper than skin.
In Buried, the next thrilling Bone Secrets novel from bestselling author Kendra Elliot, a damaged hero digs deep into his terrifying past…and unearths a chance at love for the future.

“Buried” is the third novel in the Bone Secrets Novels and it definitely put me through the ringer.

If you read “Hidden”, you would recognize the name Michael Brody since he played a part in the first novel.  We get to have way more of him in “Buried”.  In fact, Michael is trying to find answers on what happened to his brother twenty years ago when his school bus disappeared from their trip to the Capitol.Now some of the children’s remains have finally been recovered in a bunker and Michael’s brother’s remains were not there.  He is more than determined now to find out what happened to the children and now, even more, his brother.

He is about to search down the only survivor from the bus disappearance and he has to find the survivor first.Jamie Jacobs’s brother, Chris was the only survivor.  He happened to escape the killer and now is in hiding.  He will not even tell his sister where he is.  Michael is now at Jamie’s door wanting to know where Chris is…but she has no idea herself and she wants answers now as well.Now the killer has it out to find Chris as well, and he will do anything to find him.  Even hurt Jamie in the long run.Michael and Jamie will have to go on a search together to find her brother, but they may end up causing more chaos before they find him.The killer has his own secret agenda and his boss wants him to cover his tracks that he forgot to go back twenty years ago.Secrets will be unveiled from both sides and everyone will be thrown off kilter.

Kendra Elliot’s writing style is purely amazing.  She knows how to build up a story and to keep you on the edge of your seat.  I swear I was there with the characters looking for Chris and also inside the killer’s head trying to figure out why he did what he did and who was his boss.  I wanted him found from the beginning and I definitely believe he got what he deserved.  He definitely was one killer that made me want to go through the book and hurt him.When the truths finally came out…I think I literally was in shock.  Kendra threw me off so many times and the ending was definitely a shocker as well.I felt so much sympathy for Michael, Jamie, and Chris.

Michael was one determined reporter who fell head over heels for Jamie and I am glad he finally got to have the love that he was looking for.  He was so hung up on Lacey from “Hidden”, he needed to find the right person for him.  He found that right person in Jamie and Jamie needed Michael as well.  She needed someone to tell her she was okay to not have plans.Chris was the person who really stood out in this story.  The poor guy went through so much and in the end, he still was going through a lot.  He stole me the minute I was in his head and what he was going through and continued to go through.

The mystery to the story is what made me in tears and when it all came together, I was literally bawling.  This had to be one of the saddest romantic suspense stories I have ever read in a while.  It did have a happy ending, but it took a while to get there.This is by far the best novel in the series so far and I look forward to the fourth book even more now.  I want to know who is the next characters to go through a mystery and have a happily ever after.I give this book 5 full moons and highly recommend it to romantic suspense readers out there.You can read the first two as standalone, but I recommend you read them in order.  You will want to know Michael from the first book and you will also want to read what Kendra puts the other characters through.

I seriously believe Kendra likes putting her readers through emotional roller coasters.  I will be prepared more ahead of time and that is a promise.Kendra has become an auto-buy author for me and I look forward to her next romantic suspense novel. =)Be prepared for an emotional romantic thriller in “Buried” and have the tissues on hand because you will need them.  Don’t be like me and have your husband ask why you are bawling like a baby over a book.  He seriously will never understand.