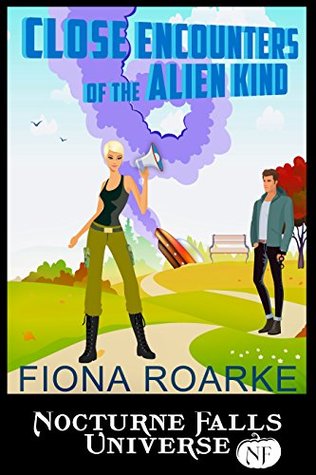 So far out of the Nocturne Falls Universe books I’ve read, Close Encounters of the Alien Kind is my favorite. I definitely was skeptic at first because this tory involves aliens in Nocturne Falls. Paranormal Creatures versus aliens is what I kept thinking, when I first started reading the story. Especially, aliens that  had mind reading capabilities and could also control what you thought.Fiona Roarke did an amazing job incorporating her characters in Kristen Painter’s Nocturne Falls town/setting. I really enjoyed reading her story in the Nocturne Falls Universe that I hard time putting it down. I wanted to follow along with the aliens and how Kristen’s characters from her books would interact with them. Let’s just say it was not very friendly at first because, like I said these aliens have powers. Imagine having your mind read by an alien that knew what kind of creature you were in a town?

I really enjoyed the storyline too with Close Encounters of the Alien Kind. Fiona introduced the town of Alienn, Arkansas in the story and also introduced some interesting characters. The main characters alone will keep you turning the pages. Both are aliens and they both live different lives.

I won’t go into too much detail with the story because I don’t want to give anything away.

I give this book 4.5 stars and look forward to the next story Fiona Roarke writes in the Nocturne Falls series. Thanks to Kristen Painter for introducing Fiona to me because now I have another new author to check out. 🙂