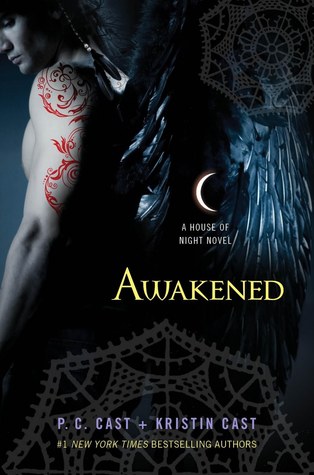 I originally read and reviewed this book on my first blog – Mrs. Papillion, aka “The Book Worm.” Now, ten years later, I’m re-reading this book to finish reading the series finally. It is finally time to go back through my books and finish the series I never quite finished. I’m glad I’ve dived back into the House of Night world. This series is one of the first YA series I read after reading the Twilight series. I wanted something to fulfill my vampire obsession at the time, and the HoN series definitely helped. (I’m still obsessed with vampires in my thirties. I don’t think I’ll ever outgrow them.)

Storyline/My Thoughts: The first time I read Awakened by P.C. Cast and Kristin Cast was when it was first released in 2011. I enjoyed the book, and I gave it a 5-star rating back when I first read it in 2011. Unfortunately, now that I’m older and my tastes have changed, I ended up giving this book a 4-star rating this time around. Don’t get wrong, I still enjoyed this book but found some issues that drove me crazy. I’m going to wait to get into those later in my review.

Both the Authors made my tear ducts work overtime in this book the first time I read it and now a second time. From the previous two books to this one, I was an emotional wreck. Why, oh why did the authors have to kill off another character or two in this book? It’s just crazy. You would think it was enough what they did in the previous book(s) to Zoe and the crew, but no, they had to do it again. Zoe is still recovering, and so is her Warrior, Stark, on what happened in Burned.

This time around, though, readers will realize even more how evil Neferet really is in this book. Even Kalona questioned her motives when they returned to Tulsa, and that’s saying something. I wish she would go away, but unfortunately, we need her; otherwise, there wouldn’t be any drama. Books always have to have an antagonist in them, especially if it’s this kind of storyline. Neferet will dive deeper into darkness in this book, which I would think she couldn’t go any deeper, but she did, and it’s worst. I feel for Zoe on finding out what Neferet is up to now in the next book. It’s bad enough that Neferet is having people turn against Zoe and her crew. Truth is finally going to come to light on what has been happening to Stevie Rae while Zoe has been away, and she may end up losing her friend, or her friend will have her back.

My favorite thing about this book was how Stark has changed and grown. He’s become a true warrior to Zoey. I’m also glad Zoey is with him and not Erik. Erik drove me crazy, and he’s not boyfriend material for her. Stark has his duties first to Zoey, though, and he takes them seriously, but he loves Zoey, and she loves him. I’m a little scared of what is happening to Stark after returning from the otherworld. When Stark retrieved Zoey from the otherworld, something occurred to him that he’s not even aware of yet, but someone else is and is using it against him. (I’m vague because I don’t want to spoil anything.)

The authors threw so many twists and turn in this book. I wasn’t prepared for it, but that’s what kept me on the edge of my seat. I look forward to re-reading Destined next when I get a chance.

Here are the things that irritated me when reading this book and why I didn’t give the book five stars this time around. I’m only giving it four stars now. (I think it’s due to me being older, and my tastes have changed, and I notice things that normally wouldn’t bug me back then and do now.)

Other than those two things, I did enjoy the book.

Would I recommend this book? Yes. If you’re a fan of Young Adult Paranormal/Fantasy books, then you’ll enjoy this book/series. This is a Young Adult Paranormal/Fantasy book that focuses on teenage characters who have to save the world from a corrupt High Priestess who follows darkness instead of light now. The main protagonist, Zoey, has a lot of weight put on her shoulders, but her friends are there to help her along the way.