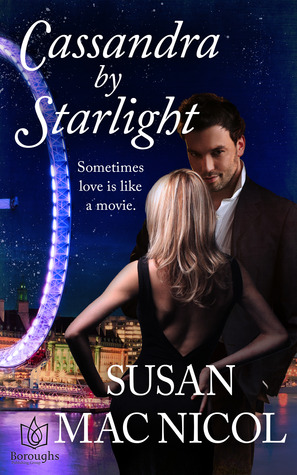 Unconventional though she may be, Cassandra Wallace leads the life of an average Londoner, from blind dates to rush hour traffic. Then, along comes Bennett Saville. Sensitive, charming, erudite, the up-and-coming actor is like the hero of a romantic movie. He counteracts the tragedy that brought them together, and from the tips of his Armani loafers to that scorching hot kiss he seems absolutely perfect. Only, he’s ten years younger and from the upper class, and those emerald eyes beget dangerous secrets. The world is a stage, full of hungry leading ladies, and how long can any fairy tale last before a villain appears? Yet, on Bennett’s arm each new day is an adventure, and a true romance will always find its happy ending.

Every once in awhile I come across a book on a book tour that I never would have found on my own that I knew I would love to read.  Thank goodness for Innovative Book Online Tours, for introducing me to “Cassandra by Starlight” because I really enjoyed reading about the handsome star, Bennett and the beautiful, courageous, Cassie. I read the book while on vacation when I couldn’t get on the computer that much since I was not around any internet services.  (My Mom lives out in the country and doesn’t need internet since she has no computer…Eeek!  What is a avid reader/blogger supposed to do…well..read of course)  =) Cassie is minding her own business driving to work, when she has a body fall into her car while she is driving.  She ends up in the hospital…while the person who fell into her car, ends up committing suicide.  The man’s family is contacted and one of the family members is the famous actor, Bennett Saville, who drops everything to identify his brother for his family and also make sure the woman that was injured is okay. Bennett, of course expected to fall in love with Cassie, the sexy, older woman who his brother happened to put in the hospital. He can’t stop thinking about her and wants to know more about her.  His father doesn’t want him getting involved with the older woman who probably just wants him for his money.  His father would rather he hook up with his ex-girlfriend. Bennett has never a great relationship with his father since what his father put him through when he was a child.  He will make up his own mind who he wants to be with. Cassie is dealing with getting back in the groove of things after the accident, when she has another dilemma happen to her thanks to Bennett’s family again. Bennet has other issues as well, but he will do anything to be with the woman he loves and so will another woman who wants Bennett as her own. I do not want to give away too much about “Cassandra by Starlight”, but let’s just say it has a lot going on.  Both Bennett and Cassie go through a lot in this book.  I felt terrible for Cassie the first half of the book and the last half I was upset for Bennett.  Actually…for Bennett, I had a more sickening feeling for him because the pain he went through.  In the end though, it all worked out. Love can conquer anything and this book definitely proved it. Cassie was one strong-willed character who was amazing.  I clicked with her as soon as she was introduced.  She went through hell and still managed to be the strongest character out of the book. Bennett was a pain at times, especially when keeping secrets from Cassie, but I had to give it to him because he had his reasons.  Cassie could throw a tantrum. Let’s just say, also, Cassie knew how to keep Bennett in check, especially in the bedroom.  =) I loved Sue Mac Nicol’s writing and how she kept the suspense and romance going.  One incident would happen and she would make sure to play it out where it fixed it self.  She never had too much going on at the same time where you got lost. I look forward to reading more books from Sue soon. I recommend this book for readers who love contemporary romance and love a little suspense to it because believe me, Sue gives you some suspense to the story. I was provided a complimentary copy of “Cassandra by Starlight” by Sue Mac Nicol in exchange for an honest review during the virtual book tour of the book brought to you by Innovative Online Book Tours.