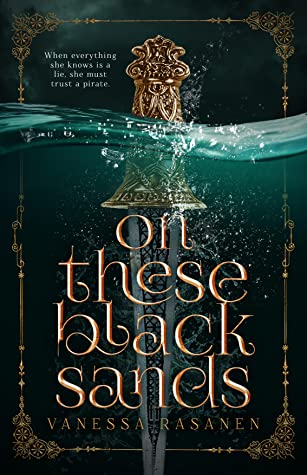 One day, I was browsing my Instagram stories and noticed one of the bookstagrammers I followed was sharing about On These Black Sands by Vanessa Rasanen. I was immediately intrigued by it due to it being a New Adult Pirate Fantasy book. I knew I had to add it to my Goodreads TBR. I then may have followed the author on Instagram and found out there would be a book box with goodies from Crap Apple that included the book. I went ahead and pre-ordered and waited patiently for the box to be delivered. Then, later on, the author announced that Wicks by Pearl was going to have an On These Black Sands Special Edition candle box. Well, that got purchased, too. =)

Storyline/My Thoughts: For me to not accidentally spoil this book, I’m not going to go into the storyline. The synopsis describes enough of the book for anyone who is wanting to read it.

First, I have not read many pirate-related books, so I was excited to read this book. Vanessa Rasanen did a fantastic job of introducing the characters and world-building in the first book.

There were so many action-packed scenes and twists and turns that I had difficulty putting down the book. I was hoping to finish the book the week it was released, but unfortunately, my migraines affect my reading schedule sporadically. I’m glad, though, that I got to savor the book longer.

I fell immediately for Declan because he comes off as a ruthless pirate, but he has a soft side. He doesn’t want to admit it. He cares for his pirate crew and is determined to complete his mission(s). The minute Aoife comes into his life is when his crew starts noticing a change in him. He won’t admit though.

Aoife was a likable character, too. She’s run away from the life she has been raised for because she finds out some things that make her question everything. She’s never really experienced life until she stows away on Declan’s ship. She’s curious about everything, which I found relatable. I can’t wait to see her grow more in the books.

I enjoyed the storyline so much in this book because it has pirates and fae and magic in it. It kept me wanting more, and I can’t wait for the next book, especially after Vanessa Rasanen left a cliffhanger to this book. I was not expecting that sort of cliffhanger.

This book doesn’t have steam in it. aIt does have a long-waited kissing scene. I had been waiting patiently for this scene to happen. I would consider this book a very slow burn with the main characters.

Overall, On These Black Sands receives 4.5 stars from me. I look forward to diving into the next book when it releases. I know this is one book that I will be reading again and again.

Standalone or Part of Series: It’s part of the Aisling series, and I would recommend reading in order.

Would I recommend this book? Yes. If you like books with pirates, fae, and adventure, then this book is for you. 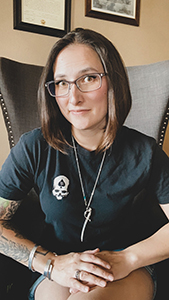 Vanessa Rasanen is an Army wife and a mother of four. She lives on very little sleep and loads of coffee.

Her debut novel, Soldier On, launched in October 2018. She has temporarily shelved the sequels to this series to shift focus to her NA pirate fantasy series.

She will eventually come back to Charlie, Meg, and Piper... but not yet.

When she isn't writing, she's working at her day job as a data analyst or running her side business designing snarky bookish merch at Crab Apple Books & More.

You can catch her being most active over on Instagram @vanessarasanenauthor.