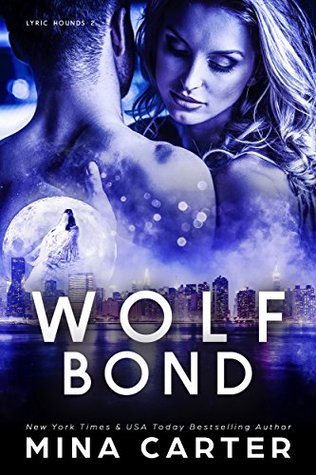 Wolf Bond is the second book to the Lyric Hounds books by Mina Carter. It is a 1NS, which means a very short read. I read it in less than an hour…more like less than 20 minutes since I’m a speedy reader. It quenched my thirst of the PNR genre that I love and adore so much.

For being a book that is less than 50 pages I was amazed at how it captured my attention from the first page to the last. I usually get annoyed for being such a small read, but Mina Carter made me love Wolf Bond. The main reason why because it was an emotional one with both of the characters being reunited after believing that one of them was dead and other dreaming about the other.

From the minute Barrett Simmons is introduced in the story, I knew I would like him because he could not get over his love for Saxon, who he lost. He thought he could get over her when he was signed up for the 1NightStand, but of course, some things can never be forgotten.

Saxon Reeves does not remember seven years of her life due to an accident, and she is going to be forced to hook up with another wolf like her. But before she does that, she’s going to do a 1NS. She is a solid character in this book due to her personality and ability to adapt well to her surroundings.

I give this book 4.5 moons and highly recommend it to readers, who are looking for a quick PNR before bed. =) Mina did a fantastic job with building the story from beginning to end. I look forward to reading even more books from her in the very near future.