ARC Review: ‘Call of the Siren’ by Rosalie Lario 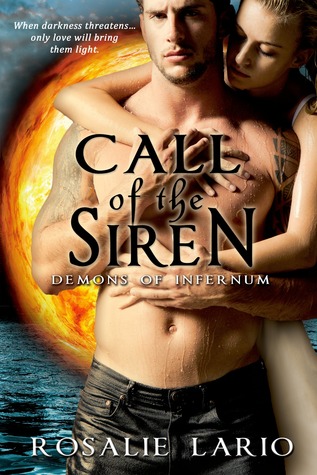 Call of the Siren

When darkness threatens...only love will bring them light.
The half-siren half-demon bounty hunter Dagan Meyers swore he'd never settle down. His older brothers might’ve adjusted well to family life but tying himself to one woman is so not Dagan’s bag. Until he meets the gorgeous angel Lina, his brother Ronin’s long-lost adopted sister, and he can’t think of being with anybody but her. Too bad Ronin’s well aware of Dagan’s party-boy lifestyle and won’t let him anywhere near his angelic baby sister.
Lina is still getting over the abandonment issues that began when she was orphaned as a child and has devoted her life to taking down evil Otherworlders. The last thing she wants is to develop feelings for man she knows will eventually leave her, too. But as the battle against a growing darkness continues—a powerful fae who’s harnessed untold power—Dagan and Lina find that love may be their greatest weapon against the very thing that threatens to destroy them all.

Call of the Siren is the fourth and final book to the Demons of Infernum by Rosalie Lario and it no doubt went out with a bang.  Rosalie concludes this series with a epic fight scene and Dagan finally getting his happily ever after.  I’m going to admit a head of time, I didn’t read in order in these series, but Rosalie does an amazing job on making it easy to follow on what happened in previous books with the other characters in the story.  At least that is how I felt while reading this book, and look forward to going back to the other books I didn’t get a chance to read before reading this one.
I hate knowing this is the last book to an amazing series because this world that Rosalie created was intriguing and like no other world I read before.  In Call of the Siren, Dagan falls in love with Ronin’s adopted-sister, Lina.  He would give up his player ways to be with her, but it’s kind of hard when Ronin (his brother) doesn’t want him with Lina.  In the mince of fighting with his brother about Lina, the demons are faced with deportation back to the Infernum due to being accused of breaking out their father (which is ludicrous since they despised their father).  Someone broke out their father and they have no idea why, but things are about to surface on what truly is happening.  Dagan and his brothers play a major role of what is going to happen and in the end they will fight their final battle together.
Lina is the main female character in the story that won our half-siren, half-demon’s heart and she definitely has had a hard life.  The poor woman/angel never felt wanted, so she took to being a mercenary to help take down the evil-Otherworlders that wreak havoc everywhere.  Every time Lina’s secrets came forward in Call of the Siren and why she was the way she was, I felt very sympathetic towards her.  She had a huge trauma that continuously affected her and made her blame herself for what happened.  I wanted to hug her several times in the book.  I can definitely say, I adored her character in this book because she was able to finally get some closure, and she became stronger for what she had to go through in Call of the Siren.
Dagan was a very sexy half-siren, half-demon that won me over because he was changing his ways due to Lina.  He had his hands full though with Ronin (who I wanted to smack around).  Ronin was clueless on what was really going on, and it started taking a toll on the love of his life.  Ronin…focus on your own love and leave Dagan alone!  Dagan deserved happiness and I’m glad he finally received his HEA.  Lina didn’t make it easy for him at first, which Dagan definitely need that challenge a bit.
Overall, Call of the Siren was a epic conclusion to this series and I’m sad to know that it has officially ended.  I loved how Rosalie had everything come together because these brothers deserved some vacation time after what they went through with their leading ladies.  =)
Be prepared for zombies in the story, fae trying to take over, and lots of fighting between the bad guys and the sexy demons we adore.
I give this book 4.5 moons and highly recommend this book and the series to paranormal romance readers out there.