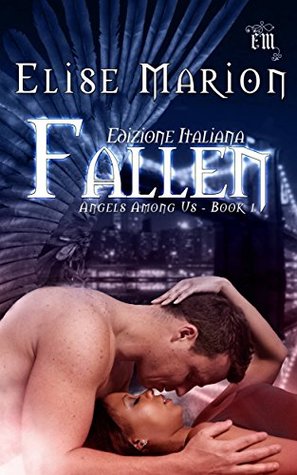 I’m a big fan of Elise Marion’s writing style, and I’m so glad I finally got a chance to read “Fallen.”  I’ve meant to read this book for a while now, but other books took precedence since I had deadlines to meet.
“Fallen” is a short, sweet read about Shayla and Amir.  Amir is an Angel who miraculously heals people that are near death.  Amir’s next assignment from God is Shayla who has been in critical condition in the hospital for a while.  Doctors believe she will not make it.
Shayla is a professional ballerina who will probably never dance again if she does pull through.  It will be a miracle if she does.  When Amir finally meets her, he realizes she has had no family visit her.  He slowly heals her, so the doctors and nurses do not get too suspicious of what is happening to her.  He tells them that he’s just a friend of hers to be there for her if she does wake up.
Amir, of course, gets attached to Shayla because he feels terrible for her.  He can reach into her mind and learn so much about her.  He realizes her parents have not been in touch with her for two years since she walked out of getting her degree and instead pursued her dream in ballet.  She suffered so many times of being turned down jobs in ballet, but now she has come to a point in her life that she is doing so well.
When Shayla finally wakes up, she has no idea who Amir is. She’s glad he’s there for her though.  She becomes attached to him.
Amir has also become so attached to her that his friend, Sarah (another angel) warns him not to be tempted by Shayla and his feelings for her. Otherwise, he will become a fallen angel.
Amir does not want to become fallen so. Instead, his father (God) gives him a chance at a new life, but should Amir take it?  He’s been a healing angel for so long.
I won’t go into it further.  It’s a charming, short book that I recommend anyone who loves reading about Angels/Demons will enjoy.  I loved how Amir was there for Shayla throughout the time she was in the hospital and afterward.  He stood up to Shayla’s parents too, which someone had to do.
This book did have me crying a bit in certain parts.  I felt sympathetic for Shayla and what she has gone through in her life.  The poor girl just wanted family support and didn’t have it until there was an almost tragedy with her.
My favorite part in the book was the last chapter since it was touching.  =)
I definitely will be reading the next book “Tempted” soon.