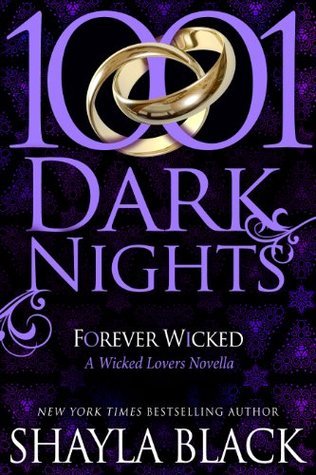 Forever Wicked (written by Shayla Black) happens to be the first story that Scheherazade tells the King in the 1001 Dark Nights series. It’s a great intro to the 1001 Dark Nights books. I have not read the other books in Shayla Black’s Wicked Lovers series though, but it was not confusing when listening to Forever Wicked. I need to rectify reading those books soon since after listening to Forever Wicked; I want to learn more about the Wicked Lovers by Shayla Black. I also like to read in order.

This is why these books in the 1001 Dark Night series are great because they introduce readers to other authors and their books. Just a warning this means your TBR pile may get bigger.

Here are the good things about Forever Wicked:

– Billionaire Jason Denning is one sexy guy. I liked him in the book, even when it was not a long book at all.

– The storyline of him was looking for his wife that he married a year ago. He wants to find out what happened, so he’s determined more than ever make his marriage work out.

– I love the scenes between Jason and Gia in the story. Very steamy! Jason is dominant. 🙂

Gia’s character. I did not connect well with her at all, especially after finding out why she left her husband for a year. I felt there was not any love from Gia to Jason. Jason felt it too but kept trying to win her over. If Jason would have ended up with another female character that maybe I would have enjoyed the story more. Although I did have a bullet above on the scenes between Jason and Gia that I liked, it was mostly Jason winning me over.

Overall, I give this book 3 stars, and if you’ve read the Wicked Lover series already, then I recommend reading this book. If you haven’t read any of the books yet in the series, then this is a reasonably good teaser to the series.