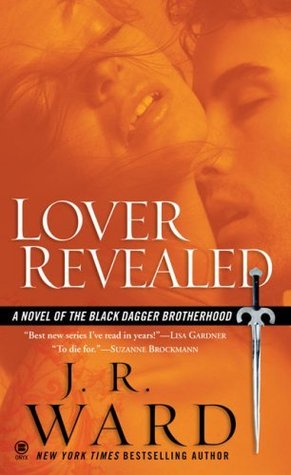 I first read Lover Revealed back in 2009, and after reading the book a second time, I can still say that Butch and Marissa are one couple I will always adore.

First off, if you haven’t read the first book in the series, then you did not get to know Marissa from the beginning. You should stop reading this review and go back and read the first book, so you can get to know one of my favorite female characters Marissa. You’ll also get the beginning story of Butch too. You want to see the beginning of how Butch and Marissa ended up meeting up with each other and also becoming obsessed with one another. I love these two together!!!

Lover Revealed is when J.R. Ward opens up so much more about Butch and Marissa. I adored Butch from the beginning in Dark Lover, but I loved him in Lover Revealed. He’s a tortured soul just like some of the other characters are. He may not have it as rough as Zsadist did, but he did have a troubled past and a distraught family that didn’t want anything to do with him. He deserves every bit of happiness though. J.R. Ward doesn’t make it easy for Butch. She makes him go through some rough times in Lover Revealed. There is so much that happens with Butch in this book, so I don’t want to give anything away. Let’s say Butch is going to find his happiness.

What can I say about Marissa? I was sad with what she had to deal with in Dark Lover, and I was even more troubled on what she went through in this book. Half the time I wanted to give her brother Havers a piece of my mind. Marissa though was not a quitter at all. She is a strong-willed, determined person, and I loved that about her. She also knows how to handle Butch, which is another good quality for her.

Now, let’s not forget that J.R. Ward does have secondary characters that steal the limelight away from the main characters for a bit. Although, it’s kind of hard when the chemistry between Butch and Marissa was worthwhile in this book. Vishous plays a significant role in this book, and I felt sorry for him at times. He loves Butch like family and would do anything for him. I read it so many times on how Vishous was there for Butch and even Marissa at times. He’s got a soft side to him; it’s just going to take the right person to get it out of him.

One of the reasons why I love this series is because J.R. Ward is a master at world building and creating unforgettable characters. This is why I’m reading the books from the beginning so that I can feel connected to the characters again. I’ve missed them. I loved re-reading Butch and Marissa’s beginning together and also finding out other things I didn’t pay attention to the first time I read the book.

This book gets 5 ‘amazing’ stars, and I highly recommend this book as well as the first three books to readers out there that enjoy PNR. If you haven’t read J.R. Ward’s books before, you’re missing out.