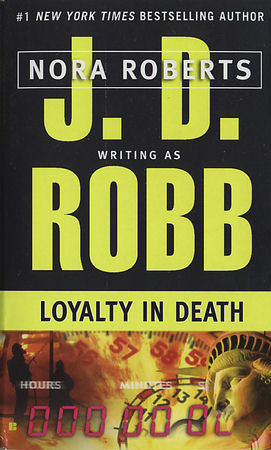 #1 New York Times bestselling author J. D. Robb's phenomenal series has captivated readers with it tantalizing blend of romance, suspense, and futuristic police procedural. Now, New York cop Eve Dallas returns to face her most ingenious foe -- a "secret admirer" who taunts her with letters...and kills without mercy.
LOYALTY IN DEATH
An unknown bomber is stalking New York City. He is sending Eve Dallas taunting letters promising to wreak mass terror and destruction among the "corrupt masses." And when his cruel web of deceit and destruction threatens those she cares for most, Eve fights back. It's her city...it's her job...and it's hitting too close to home. Now, in a race against a ticking clock, Eve must make the pieces fit before the city falls.

Loyalty in Death has to be one of my favorite books in the In Death series, so far. I know I have a lot more books in the series to get through, but as of right now, I had a hard time putting down this book.

Eve Dallas is being sent taunting letters from an unknown bomber in this book. This bomber wants specific demands completed; otherwise, they will start wreaking havoc in New York City. The bomber does start bombing, and they begin targeting particular buildings. Those buildings end up being owned by Roarke. Eve and her team will have to race against the clock to prevent further bombings. It’s not going to be easy for any of them. Roarke also plays a role in this book again on helping Eve. He’s starting to be there more often for her in her job, and he does it so well. I adore his character.

In the meantime, other cases will come up in the book that will make them question who is really behind the bombings. Is it some crazed person wanting crazy demands for fun, or is it an organization wanting to complete something that happened years ago?

This book kept me on the edge of my seat with the bombings and crazy whirlwind storyline. J.D. Robb knows how to keep a reader flipping the pages. Each investigation or case that Eve and her team has to handle gets more insane.

There was one thing that happened in this book, too, that made me all giddy. Let’s say it involves two certain characters who have been nonstop bickering back and forth with each other for a while. Finally! I want more of these two characters in the upcoming books. I’m crossing my fingers.

Be prepared because there are parts in the story that will upset you, especially after finding who is behind it all.

Overall, this book gets five stars from me, and I highly recommend this book and series to Romantic Suspense readers out there.