Review: ‘She Can Tell’ by Melina Leigh 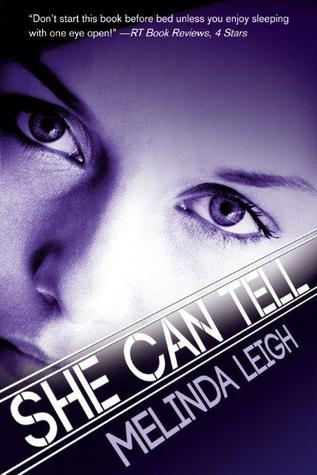 When a terrible accident abruptly ends her riding career, Rachel Parker returns to Pennsylvania to rebuild her family’s horse farm. But her welcome home is anything but warm. Her sister’s abusive husband and a violent vandal threaten Rachel’s new business and her life. Someone is systematically trying to destroy her. Someone who knows private things about her. Someone who’s been watching her. Now Rachel must face the fact that the sins of her carefully hidden past have returned to haunt her.…
Police Chief Mike O’Connell never had trouble drawing the line between his personal life and his job—until he met Rachel Parker. Mike’s investigation uncovers a shocking number of secrets and suspects. But the stalker’s escalating violence convinces him he doesn’t have much time to sort through it all. Whoever is watching Rachel wants her dead. Mike and Rachel race to untangle a web of deceit and lies that stretches two decades into the past—before her stalker strikes again

My Review
This book did not take me long to get into at all. Let’s just say I ignored my hubby for about a few hours so I can finish this book without interruptions.  Every time he tried to talk to me, I would glare at him with the evil eyes. I really had a hard time putting down this book. =)  I was sucked in from the first page.  Melinda Leigh did a fabulous job on this book and now I’m anxiously waiting for the next in the series.
Rachel Parker is back home from her travels due to a life changing event that almost killed her.  She’s now back home training other people to ride horses because she has been told to not ride again due to her riding accident.  Instead of having a nice homecoming, she’s having vandalism happening at her barn and threats to intervening in her sister’s marriage.  Rachel was not there for her sister, Sarah when she left and now she is trying to make up for it.  One night, Rachel is about to risk her life to save her sister from her drunken husband.  In the mean time, she ends up almost killed, but the cavalry arrives in the nick of time to help her.  She meets the handsome Police Chief who makes her realize that maybe her ex was wrong about her.  Maybe she can truly love someone.
Mike O’Connel, Police Chief of the small town in Pennsylvania, is still getting over the fact that he had a serial killer on the loose for awhile and almost had his friend’s future wife killed because he was not there to save her.  Now he sees two other women harmed by a man who can actually get away from it due to who he is related to.
Mike becomes attached to Rachel right away and wants to protect her and her family.  He will defy his job and everything else to protect someone he just met, but for some reason this woman has changed him.
Not only is Mike having to find out the stalker who is going after Rachel, but he is also helping with Rachel’s sister’s case with her husband.  He is also trying to keep his job.  It is kind of difficult due to the fact Rachel is one mean spirited woman who can be hard-headed and stubborn.  He will have to get her to open up and realize she needs help….especially from him.
One of the many reasons that I loved this book is that I could not figure out who the stalker was until he finally was discovered.  I would think it was one person and then Melinda would put something in the book that made be suggest another character.  Ugh!  I was getting frustrated, but then when the stalker was finally figured out, I was in shock.  I must of missed a clue somewhere.  I was definitely not expecting that at all. I loved every minute of being in shock over it.
I had a hard time putting down this book because I wanted to know what would happen and when I got to an end of a chapter, I knew I had to continue on.
I really love how Melinda Leigh switches to different points of views.  She even put in secondary characters views as well, like Sarah, and Ms. Holloway.  It was great to be another character’s head even if it was a little awhile.
I loved both Mike and Rachel and how they definitely were meant to be with each other.  Rachel was one strong female character lead and Mike was introduced in She Can Run and I had already fell in love with him then…but this book made the love grow even more.  Oh…and it helped with the description of Mike’s body as well.  (can you say SEXY!!!!)
I also enjoyed the secondary characters, Sean, Sarah, Quinn and even Jack and Beth were in this book as well.  Jack and Beth were in She Can Run so it was great to see what has happened to them after their book.
I definitely recommend this book to romantic suspense readers out there and fans of Melinda Leigh.  You’ll keep turning the page or clicking your e-reader to find out the stalker is.  Melinda definitely kept me enthralled from beginning to end.
Just be warned…”She Can Tell” is going to make you want more after you are done reading it.  =)
Looking forward to the next installment in the She Can Series from Melinda Leigh.
I received a complimentary copy of the book from the publisher in exchange for an honest review.