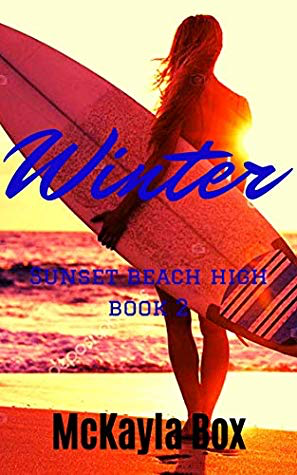 I'm not New Girl anymore.
I have friends.
And I have Trevor.
Friends I trust and a boy I love.
Things should be easy.
But things are never that easy.
Never that simple.
Because I also have enemies.
Old and new.
And they aren't happy that I'm happy.
So the target is still on my back.
And it's bigger than ever.
WARNING: Winter is the second book in The Sunset Beach High series. It contains mature themes, sexual content, and profanity. If you're not a fan of those things, this isn't the book for you. But if you like serious stuff mixed with lots of bad words and some sweaty sex, THIS IS THE BOOK FOR YOU. It is the second in a four book series.

Unfortunately, the second book didn’t get the 5-star rating, though, but most of it was due to editing issues that I came across when reading the book and certain things the heroine did or didn’t do (especially with what happened to her in the first book). I believe this story would’ve gotten a 4.5 to 5-star rating if the editing issues were fixed. Some of it was quite obvious with missing words and misspellings. I’m a fast reader and sometimes don’t catch errors in stories unless I reread the book, but I was reading the second book slower than I usually would read a book. I’m glad that the author summarized the first book a bit in the story because it had been a while since I read the first book.

I wish Presley would’ve gotten the police involved from the incident that happened to her in the first book. There’s also what happened to her in the second book, but she handled the situation better than I expected. She stood up for herself even after her friends and boyfriend didn’t believe what happened. I was proud of her, but still thought she should have gone to an authority figure or even her father. That’s just me being a parent, though, who has her teenage daughter that I’m protective of in real life.

Enough with the negative, though, because I did like reading the second book, and I plan on reading the third/fourth books. I love high school bully romances and can say that McKayla Box makes the Sunset Beach High books extreme bully. The second book involves a new enemy or two for Presley and Trevor and their new relationship. Trevor ends up having his ex-girlfriend back in Sunset Beach and now wants him back even though she broke up with him. There’s also the issue of a particular ex-best friend that wants to make Trevor’s life difficult by getting to Presley. In comes the drama with the ex-girlfriend and ex-best friend.

Poor Presley is going to lose her friends and boyfriend in this book due to what happened to her. Like I said before that I was proud of Presley on how to handle it all. Even though she had her friends turn against her in the second book, she had at least one person stick up for her. I liked how the author kept me on the edge of my seat with all the drama and how everything unfolded.
There are some severe triggers in this book, but a reminder for readers that this is a high school bully romance. It involves a heroine getting bullied to the extreme and fighting back the bullies. Although parents and police should’ve been involved with certain situations, I’ve reminded this a fictional book. If I were Presley’s mother, then those bullies would’ve been dealt with immediately by the police, principal, etc.

Overall, even though this book is getting a 3.5-star rating, I still would recommend it to readers that enjoy High School Bully Romances and Young Adult Contemporary. Here’s hoping that Presley gets to enjoy her Senior Year in High School without some crazy drama, but I know the next two books are going to involve some even more excitement. Here’s hoping she gains her trust back in her friends and Trevor.

Story Rating: 3.5 stars
Standalone or part of series: Part of Series
Do I recommend this book? Yes.
Will I read other books from the author? Yes.
Tropes/Elements: High School Bully Romance; Triggers: Sexual Content (An altered explicit video/picture being done); Almost Rape; Lots of Fighting and Revenge