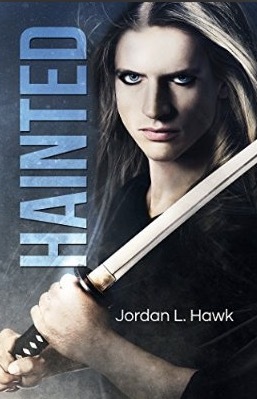 The Good Guy: Haint-working runs in Dan Miller’s blood. Not everyone can help the restless dead cross over, especially when the haunting threatens the Living. But the death of his parents six years ago forced Dan to give it up in exchange for raising his brother and sister, all the while struggling to keep their rural NC farm afloat.
So when the flamboyantly goth Leif Helsvin shows up on Dan’s doorstep looking for help with an evil necromancer named Runar, Dan’s first instinct is to turn him down. With two teenagers to look after, he’s already got all the trouble he can handle. Besides, the sexy Leif is too much of a temptation, and Dan is firmly in the closet.
The Bad Boy: Pierced, tattooed Leif never has sex with the same guy twice. It keeps things simple, especially since his oath to stop Runar has him constantly drifting from one town to the next.
But this time, it looks like Leif is going to need help, in the form of the very down-to-earth Dan. Since Nice Guys are off the menu, Leif just has to keep his hands to himself for as long as it will take to stop Runar’s latest scheme. But as Leif finds himself drawn deeper into Dan’s life, he quickly realizes he’s not just in danger of breaking the rules, but breaking his heart as well.