Review: ‘Fire on the Island’ by J.K. Hogan 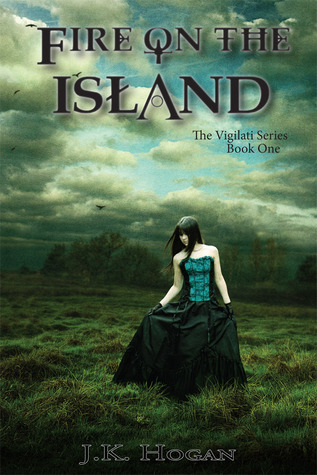 Fire on the Island

“She who wields the mark is the barrier between man and monster. She is the daughter of gods, the mother of man, protector of all. Vigilati Usque Ad Mortem”
All Isla Macallen wanted was a simple existence on her little Scottish island, free from her mother’s insanity and the prying eyes of neighbors. What she got was embroiled in a war for the souls of mankind. A war of good versus evil, of witches versus demons, and Isla learns that she alone can end it.
Dr. Jeremiah Rousseau was a self-proclaimed nomad, traveling the world researching paranormal phenomena. He doesn’t expect his research to lead him to Scotland, and to the woman who will turn his world upside down.
Together with a facetious shapeshifting animal spirit guide, Jeremiah and Isla discover that she is part of an ancient bloodline bred to protect the gateways between the human world and the spirit world, to keep evil demons from destroying them. They must find the key to defeating Alastore, the demon king, and closing the gate before Samhain, when the veil between the worlds is lifted. As the war for their souls wages around them, Isla and Jeremiah will risk it all for love—a love neither had ever thought possible.