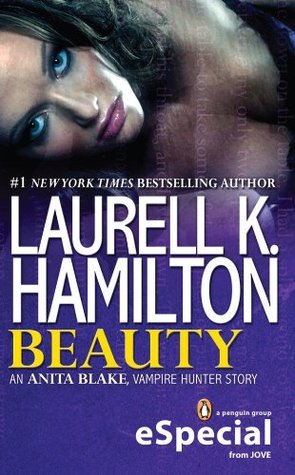 (This is my honest opinion on this ebook)

I did not even realize that “Beauty” was coming out this week. I found out through Laurell’s twitter. I jumped at the chance to buy this eSpecial through Amazon once I did find out. Hello..avid Anita Blake fan here and a HUGE fan of LKH’s writing style. It also stated a sneak peek into “Kiss the Dead’, which I do not think LKH has ever done that. Yup wanted this. =)

I read it within 15 minutes and after I finished it…it maybe want “Kiss the Dead” even more. Hurry up, June and get here already.

Okay, I’ve seen the negative reviews on this book on Goodreads and Amazon…but of course that did not stop me from spending the $2.99 to read this 33-page ebook on my Kindle. It’s two chapters of M-F-M scenes between Jean-Claude, Anita, and Asher. (I think I’ll re-read this ebook before “Kiss the Dead” comes out…Oh yes I love me some Jean-Claude & Asher)

This is underneath the cost of the Kindle book on Amazon. The publisher set the value of the book, not the Author. If you think the 33 pages is not worth $2.99, then do not buy the book. You’re warned ahead of time it’s an outtake of “Kiss the Dead.” If you find it’s pointless to read an ebook that is an outtake, then do not buy it. Just wait patiently for the next full Anita Blake book to come out, which is only in a few books. If you hate the series because of the direction of LKH has taken Anita on…then do not read this book.

One thing I love about LKH, she will not let reader’s influence on how she writes books. If she wants her lead character to act a certain way…she’ll write it in the book.
When she wrote one of the books from Anita Blake…she had a death in the family and had it influence her writing. One of the main characters ended up being killed. I’ve followed her blog for a while now to find out how one of my fave Authors comes up with the Anita Blake series.
I still do not know how LKH, Charlaine Harries, etc…are able to write these books. They have to keep up with the characters for so long. More power to the Authors who can do this.

I recommend this short Ebook to Anita Blake fans out there who haven’t given up on her and adored LKH’s writing style. I recommend it also to someone who is anxiously counting down to the next Anita Blake installment that comes out this June and wants a sneak into the first chapter of “Kiss the Dead.”
This ebook is just for the diehard fans of Anita Blake and LKH.