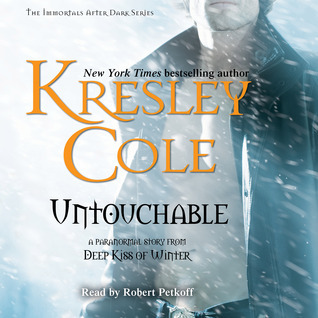 In this paranormal story from the

anthology, #1 New York Times best-selling author Kresley Cole delivers a breathtaking tale about a brutal vampire soldier who experiences love for the first time...and a Valkyrie aching to be touched.
Murdoch Wroth will stop at nothing to claim Daniela the Ice Maiden -- the delicate Valkyrie who makes his heart beat for the first time in three hundred years. Yet the exquisite Danii is part ice fey, and her freezing skin can't be touched by anyone but her own kind without inflicting pain beyond measure. Soon desperate for closeness, in an agony of frustration, Murdoch and Danii will do anything to have each other. Together, can they find the key that will finally allow them to slake the overwhelming desire burning between them?

I originally read Untouchable within the Hardcover version of Deep Kiss of Winter back in 2010, which included Gena Showalter’s story. Now nine years later I liked re-visiting Murdoch’s and Dani’s story but in audible version. Robert brought their story to life, but I found Dani’s character more likable than Murdoch. Murdoch is a vampire that was changed back in the day, so he is one of the fore-bearer vampires. Dani is half-valkyrie and half ice fae. She’s known about Murdoch since she’s older than him.

Murdoch though doesn’t know about her. He doesn’t know about her condition, and he doesn’t know that she is being hunted by her the Ice Fae King who wants her dead. This is the same King who killed her Mother.  Murdoch though is there to help her during the time the Ice Fae are there to kill her. He ends up finding out eventually he cannot touch her. No one can touch her; otherwise, they will burn her skin and will be painful to her. The minute Murdoch realizes Dani is his fated mate he will do anything to be able to touch her. They both are in love with each other, but Dani realizes that she will never be able to have a physical relationship with Murdoch indeed. She tries to get help from Nix, but Nix is being the usual Nix and only speaking in mysteries, which is why I love Nix. She is the ever knowing. She has her agenda in every book, and she can’t blurt it out. She needs the fated mates to figure it out on their own; otherwise, it will be less fun. I love her character. 🙂

This novella was longer than the first novella in the series, which had a lot more to it. This was a book about love, betrayal, and courage for both Murdoch and Daniela. I recommend reading this book, but if you haven’t read the previous books in the series, you will need to read those first; otherwise, you won’t get the gist of what’s going in the series. You can read the novellas back to back, or you can read the books in order. Kresley is a fantastic writer. This book is the last Wroth brother’s book so that you will get a little bit of Nikolai’s, Sebastian’s and Conrad’s stories are woven into this storyline, so be prepared to get some repeated storylines, but from a different point of view (Murdoch’s POV). I love how Kresley does her stories, which is why I love her series and storytelling.

Story Rating: 4 stars
Steaminess Rating: 3.5 stars
Standalone or part of series: Part of the Immortals After Dark series and I highly recommend reading in order.
Do I recommend this book?  Yes.
Will I read other books from the author? Yes. She’s one of my auto-buy favorite authors.
Tropes/Elements: Fated Mates
Hero: Vampire (Fore-bearer)
Heroine: Valkyrie

A master’s grad and former athlete, she has traveled over much of the world and draws from those experiences to create her memorable characters and settings.
Her IAD books have been translated into 23 foreign languages, garnered three RITA awards, a RWA Hall of Fame induction, and consistently appear on the bestseller lists, in the U.S. and abroad.

Cole lives in Florida with her family. Learn more about Kresley at: www.kresleycole.com & www.thearcanachronicles.com