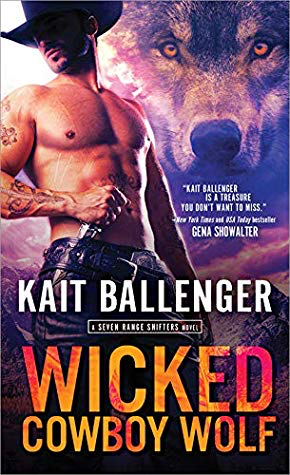 If they think he's wild now, they haven't seen anything...

Years ago former Grey Wolf Jared Black took the fall for a murder and was driven from his pack. Now he's the mysterious criminal cowboy wolf known only as The Rogue. He's a fierce protector of vulnerable loners, but now that a vampire threat endangers all wolves, he must confront the pack again, including the only woman he's ever loved.
Maeve Gray has her own battles to fight. Pack duties dictate her every move—and she's sick of it. Ever since she escaped the clutches of her pack's enemies, her one goal has been defeating the bloodsucking monsters for good. But each passing day further risks the lives of her friends and family. Mae needs a solution—and fast—so when The Rogue shows up on the Grey Wolf ranch, offering everything Mae's heart desires, she has no choice but to trust him. But for this cowgirl, sleeping with the enemy could prove as deadly as it is desirable...
Seven Range Shifters Series: Cowboy Wolf Trouble (book 1) Cowboy in Wolf's Clothing (book 2)Wicked Cowboy Wolf (book 3)
What People Are Saying About Kait Ballenger: "This story has it all—a heroine with grit, and a hero who backs up his tough talk with action."—Fresh Fiction for Cowboy Wolf Trouble "[A] mix of action and steamy sex... Crash-bang excitement."—Publishers Weekly for Cowboy Wolf Trouble "With action, tension, and heat...hits all the sweet spots of paranormal romance. Recommend to readers of Nalini Singh and Maria Vale."—Booklist for Cowboy in Wolf's Clothing "High-voltage!"—Publishers Weekly STARRED review for Twilight Hunter, a PW Top 10 Romance

Wicked Cowboy Wolf is the third book in Kait Ballenger’s Seven Range Shifters series. If you read the previous book in the series, then you would’ve been introduced to Maeve Grey and The Rogue. The Rogue saved Maeve from the Vampires, and now he’s back to protect her from the Vampires again. Maeve has to decide to save her pack by going with the Rogue. Otherwise, her pack will be in danger of her being there. What she doesn’t know is the Rogue has his plans when taking her from her pack. Years ago, the Rogue was apart of the Grey Wolf pack, until he was driven from the pack after he took the fall of a murder of one of the Grey Wolf pack members. He has revenge on his mind for the Grey Wolf Pack, and unfortunately, Maeve is caught in the middle of that revenge.

Maeve though, finds it difficult not to have feelings for the Rogue when he whisks her away to his ranch. Unfortunately, he’s her pack’s enemy and should be hers also. This wicked cowboy has a secret that he’s keeping from her, and it may hurt her at the end when the truth comes out. I was not too fond of the fact that the Rogue, aka Jared Black, was keeping the secret. He should’ve told her right away, but instead, he was stubborn throughout the book. Stubborn Wicked Cowboy Wolf!

I loved that Rogue and Mae got their book, after what happened in the second book. I needed to know more about the Rogue and why he was the mysterious criminal wolf. He had another side of himself that was soft, and readers will find out more about him in this book. He’s not the big criminal that everyone assumes. He reminds me of Robin Hood when it comes to the rogue wolves that he hangs out within this book. Let’s not forget the tension and passion between Mae and Rogue too. These two had a story behind that tension.

Forewarning, though, that this book does have dark triggers in it that involves rape, assault, and murder. I was uncomfortable with certain parts of the book but was able to power through it. I felt for the characters when the truth came out in the end and loved how Kait ended the book with a HEA. They deserved that HEA after everything they went through in the past and present. Now I anxiously wait for the next book in the series to find out who will be the next couple. I love this paranormal world because it involves shifters that wear cowboy hats and work on ranches. Kait Ballenger makes me want to visit Montana and Idaho after reading about this series. If you are a fan of paranormal romance that involves action-packed adventures and sexy cowboy/rancher wolf shifters, then this book is for you.

Story Rating: 4 stars
Steaminess Rating: 3 stars
Standalone or part of series: Part of series, but each book follows a new couple.
Do I recommend this book? Yes.
Will I read other books from the author? Yes.
Tropes/Elements: Enemies-to-Lovers; Friends-to-Lovers; Triggers: Rape/Assault/Murder