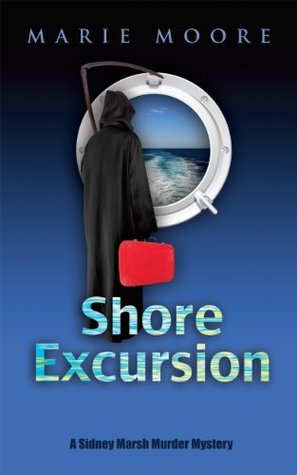 My Review
I was in the Navy for over ten years and got to sail the seas a lot while I was in, but I have never been on a luxury cruise liner. Don’t even think the Navy ships compare to Carnival or Disney Lines…because they don’t. =) How I wish I could enjoy a Carnival Cruise. Maybe someday, but for now, I’m going to stay on land since I did too much sea time in the Navy and also after reading “Shore Excursion”, I definitely don’t want to be apart of a Murder Mystery or even a ship tipping over to its side (which recently just happened). Eek! I love mysteries every once in a while and after reading the book summary for “Shore Excursion,” I knew I had to read it. We’re introduced to Sidney Marsh in this book which is a Travel Agent, which in today’s world you don’t hear much about anymore.
Her job in this book is to be a Tour Leader for the High Steppers which are a lively bunch of senior citizens. Poor Sidney Marsh didn’t sign up for a few murder mysteries on board her tour though. She takes it upon herself to try to solve the mysteries on the vessel, but unfortunately, she either has a lot of people telling her not to get involved, or she is getting caught up in dangers herself. It’s a win-lose situation for her, but someone has to help her “High Steppers.” Marie Moore takes you on some crazy turns and twists through this book. You will never expect really who the murderer is until the light bulb clicks on in your head at the end which is what happened to me. Marie Moore created some fascinating characters in this book, and I have no idea how she kept up with them all, but I adored every one of them. I even felt terrible with the characters that were killed — the whole time I was rooting for Sidney to solve the mystery so we could have some closure.
I look forward to reading the next Sidney Marsh mystery from Marie Moore. If you love mysteries and want to take a ride on a cruise ship (not literally of course) to solve a murder mystery or two, then you need to read this book.