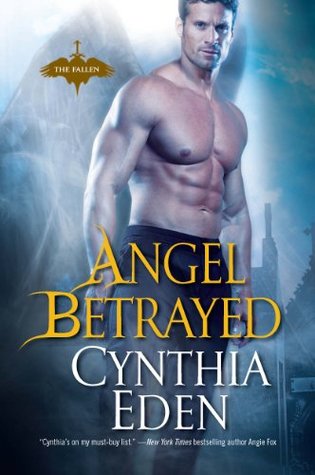 A LITTLE BIT OF ANGEL LUST.
Sammael – call him Sam – was an angel once. An angel of death. But the dispassionate, watch-from-above thing just wasn’t working for him when it meant watching evil torture innocent souls day in and day out. It might have cost him his wings, but these days, he gets to apply the direct method on the bad guys. Problem is, what’s making his life difficult is a bad girl…
Seline O’Shaw needs protection, and with the hounds of hell on her tail, she’s not going to quibble too hard about where she gets it. Sam’s virtue is questionable, but he’s smoking hot, massively powerful, and owes her a favor. So what if she’s getting a little case of angel lust? There are some damn deadly sins after her hide…

My Review
I was so happy that Netgalley had this book before it’s publication date.  I think I screamed like a little girl when I got it.  I love Cynthia Eden’s books.  =)  Unfortunately, it took me longer to read it due to other things in life that took precedence.  Boo!  Let’s say this Book Mama was not very happy to put “Angel Betrayed” off for a while to do college homework.  Grr!  Don’t these professors know I need my Romance books to keep me sane?  Geez!
I’ve been counting down the days to read Sammael’s story since he was introduced in Angel of Darkness.  For some reason, I grew attached to him because he is such a badass.
I wanted to know which female character would tame this fallen angel and I also wanted to know why he fell.
Cynthia picked the best female character to capture Sam’s heart.  I was not disappointed.
Sammael, fell centuries ago because he took matters into his own hands to kill men off that weren’t supposed to die yet.  He also enjoyed it a little too much.  (once I read why he killed the men…I understood why he did it…and I couldn’t blame him…I think I would’ve done the same thing)
He now owns a club called Sunrise where he meets, Seline.
Seline is a half-breed.  (She’s half succubus, half angel)  She has a mission to take out Sammael from someone who wants to punish Sam.  Unfortunately, that mission goes not as planned. Who can resist the sexy fallen angel, Sam?  Although, she doesn’t know what he is until later. She needs Sam’s help on gaining her freedom from the person who wants Sam dead.  Sam does not want to help her at first until he realizes what she is and how she could help him find Azrael.  (another fallen angel who also appeared in Angel of Darkness)
Both of them are now being hunted by the same guy, and fallen angels are being killed everywhere now.  It’s up to Sam and Seline to find the fallen angels that are on the hit list to save them.
My thoughts on “Angel Betrayed” were of course not disappointed.  I love Cynthia Eden’s Fallen Angel world she has created.  It’s way different from any other fallen angel stories out there.  I also learned there are other types of angels in this book (not just Angel’s of Death) that weren’t introduced in the previous book.  Yes definitely like the way Cynthia has taken this world.
I loved Seline’s character and how strong she was and how she could take care of herself.  I loved her abilities, and I loved how she handled Sam in the book.
I adore Sam…and he is my FAVE of the Fallen Angel’s…(probably until I read Azrael’s story)  Found something out about Azrael in this book that I wasn’t expecting.  =)
Sam, in my opinion, could have been forgiven for what he did to those men before he fell, but of course, that’s now how it works in the Angels’ world.
There was a lot of action in this book and of course some steamy scenes between Sam and Seline.  (Jealous of Seline just letting everyone know…damn her)
Now I have to wait until the next book comes out.  I can wait patiently.  At least try too.  =)
Thanks, Cynthia Eden for creating these Fallen Angel series.  =)
I recommend this book to paranormal romance readers out there, fans of Cynthia Eden, and of course those readers who love reading about sexy fallen angels. You will not be disappointed with these books.  =)