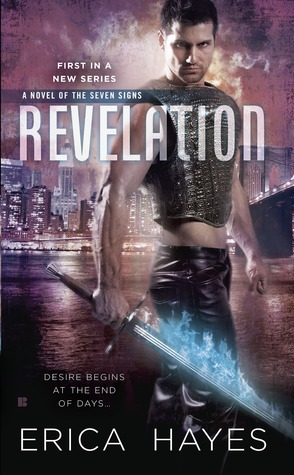 A fallen angel with a mission and a medical examiner who’s lost her faith are fighting for their souls in a glittering, near-future Manhattan…
Blind faith is for fools. That’s what Dr. Morgan Sterling believes. And she’s going to prove it by curing the zombie plague ravaging her city’s slums. She’s certain it’s not a sign of the End of Days, but a nasty disease—until an angel appears in her morgue in a flash of glory.
Luniel is not just a fallen angel. He’s a powerful warrior sworn to fight evil in hopes of a chance at redemption. He’s after the demon princes who are stealing the seven vials of holy wrath which, when perverted, will unleash eternal hell on earth.
To stop the plague, Luniel needs Morgan’s help, and her faith. But Morgan believes science is their salvation. If the zombie plague is a demonic curse—and if Luniel is true—he’ll have to prove it. Even if he loses his heart to true love or his soul to Hell…

My Review:
I am a cover lover…or maybe cover luster…because when I saw the cover of “Revelation”, I knew I needed to read this book. (And no I did not go crazy over the guy on the cover for the first time…it was the sword on fire and the colors.)   I then sealed the deal when I read the synopsis of the book. A book about crazy, sexy fallen angels, a plague that causes zombies, some demons that want to cause the apocalypse to start, that is pretty much a seller in my eyes to read this book.

Luniel is a fallen angel, but he’s not your normal run of the mill fallen angel.  He has a job to do.  He is meant to fight off evil and keep the earth from dealing with catastrophe.

His job is about to get tough though when he starts noticing things that are not normal with the humans and the Earth.  He believes one or more of the vials of holy wrath that is supposed to be safe have been compromised.  He must search out his other warrior fallen angels to find out what has happened and hopefully stop more vials from being compromised.  He must find the culprit who has caused the plague and the ocean to turn red. In the meantime though, Luniel ends up hooking up with a medical examiner who accidentally stumbles into his world.  Dr. Morgan Sterling has no faith since her mother killed herself many years ago.  She has literally been through it all to get to where she is now and now she has fallen into a paranormal world, she did not know existed. She is trying to cure the plague that is attacking the city and she knows there has to be a cure out there, but Luniel the fallen angel she stumbles into one day due to her latest exam….is about to show her a world they may have her start believing in faith again. Erica Hayes builds a world where it is further into the future and fallen angels are definitely not what you expect to be.  Both the characters Luniel and Morgan had some strong points, but they also had their weak points. Luniel was strong, sexy, determined to find the culprit that has made the plague come true.  The only main thing I did not like about him, is that he did not have a way with words, especially when it came to Morgan. Morgan had her moments where she was strong-willed and determined as well, but I rarely clicked with her.  She was stubborn at times and she definitely made some serious mistakes. There was the sexual tension between Morgan and Luniel. Luniel telling himself he should not hook up with Morgan and Morgan saying she should not believe him at all.  It was back and forth between the two.

I will say this, Erica Hayes knows how to build up that tension and write some sexy, steamy sex scenes between the characters. One turn-off though was what happened to Morgan and what she wanted to do with Luniel (you’ll have to read the book to find out).  She definitely became a different person then, but she had her reasons. I loved the other fallen angels.  I want to know more about them and their bad ways. The one thing that had me in shock in “Revelation” was the Archangel, Michael…because I am a little confused with what he is intending to do…but that is something that maybe I’ll find out about in the second book a little more.  In my eyes, he seemed to not be the nice archangel that we’re used to in books. The demons in this story were just as ruthless and disgusting at times.  The way they were described, I am hoping I do not have nightmares.  Erica Hayes knows how to write a very detailed description, which definitely is amazing.  If this book was made into a movie then I would hope Hollywood would stick to what the Author describes as far as the characters and even the scenery.

Overall, I did enjoy this book and I look forward to reading the second one.  I felt through the book dragged a little bit and I lost interest in certain parts of the book, when it picked back up, I had a hard time putting it down.  It also had it’s moments where the characters did not click with me.  Morgan was not my favorite character in the book, but she did have moments where I did like her.  She just was too stubborn and did not listen very well.  She was always battling with her inner voice or voices I should say. Luniel was the person who I clicked with more because of his ability to fight even when it came to Morgan. I give this book 3.5 full moons and I look forward to reading what Erica Hayes does next in the second book. I recommend this book to paranormal romance and urban fantasy readers out there who enjoy fallen angels that kill demons for their job and their pleasure.

I received a complimentary copy of the book for the blog tour in exchange for an honest review.