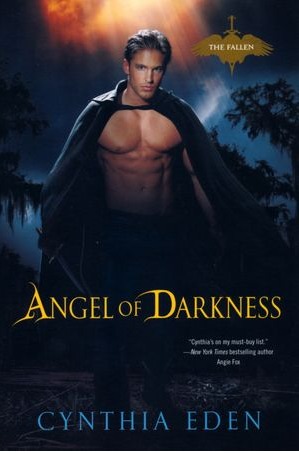 I saw “Angel of Darkness” on my Recommended Reads from Amazon.com, one day, and thought I would try it out.  It took me a while to receive the book since I borrowed it from my Library, but once I did get it, I had a hard time putting it down.  Cynthia Eden, you are a New Author to me, and I love “The Fallen” Series so far.  I’m used to sappy Angel stories, where the Angel is a girly boy (Yes…I said that).  I needed a Manly Angel who was Dark and Sexy…and you gave me just that and more.
Cynthia Eden throws you into a different world of Fallen Angels.  This book is about Keenan, and he’s the Angel of Death.  It’s his job to take souls to Heaven after their Death (sometimes horrific).  Unfortunately, Keenan doesn’t do that to Nicole’s soul.  Instead, he interferes with her death, but instead of a happily ever after for Nicole, she turns into a Paranormal being herself.  She never expected Vampires to exist, let alone Angels.  What’s the craziest thing about Keenan and taking the souls are one touch, and you’re dead, but you have to be close to death (mostly).
When Keenan interferes of course he’s stripped (burned) of his wings.  He crashes to Earth and his main focus to find Nicole again.
That doesn’t turn out well for him when he sees Nicole again.  That poor girl is put through hell.  She’s hunted down several times, thrown into the chaos of the Paranormal World.  What is Keenan to do to prevent her death again?
I loved everything about this book, the drama, the action, the romance and of course the characters.  I can’t wait to see where Cynthia Eden takes us next in the Series.  Although, she does do a sneak peek of who is up next in her Series.  I did think some characters were annoying, and I wanted to BITCH Slap a couple of them…but who doesn’t have a Villian or Villians that do that to you.
I wasn’t expecting the ending and who was the ACTUAL Big Villain.  What that Villain had to go through at the end to defeat him (He got what was coming to him).
This is recommended read to anyone who loves reading about “Fallen Angels” and loves twists to the Heaven/Hell stories.
This is categorized one of the Best “Fallen Angel” Book I’ve read in a while…next to “Touch of Crimson” by Sylvia Day of course.  =)