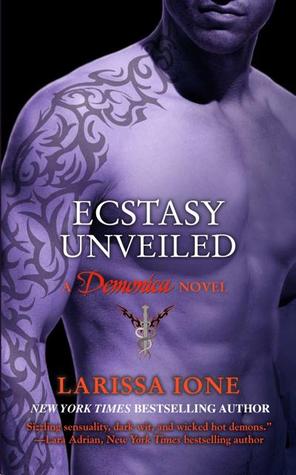 A DEMON ENSLAVEDLore is a Seminus half-breed demon who has been forced to act as his dark master's assassin. Now to earn his freedom and save his sister's life, he must complete one last kill. Powerful and ruthless, he'll stop at nothing to carry out this deadly mission.
AN ANGEL TEMPTEDIdess is an earthbound angel with a wild side, sworn to protect the human Lore is targeting. She's determined to thwart her wickedly handsome adversary by any means necessary-even if that means risking her vow of eternal chastity. But what begins as a simple seduction soon turns into a passion that leaves both angel and demon craving complete surrender.
Torn between duty and desire, Lore and Idess must join forces as they battle their attraction for each other. Because an enemy from the past is rising again-one hellbent on vengeance and unthinkable destruction.

My Review
(Originally Reviewed on Mrs. Papillion aka “The Book Worm”)
Let me just say Idess is an amazing character in this story. I’ve always been fascinated with Angels and although Idess may not be fully Angel, yet…she definitely has the best attributes on becoming the PERFECT Angel. Lore may not be a perfect match for her at first, but he grows into this different person towards the end. It’s triangle in this book though since the way Lore meets Idess, is darn good one. The man he has to kill is actually the man she has to keep alive and to top it off, Lore doesn’t understand that he can’t kill the person he’s supposed to kill because only a Angel can. Then it turns out Idess has to keep an eye on Lore too. It’s just a mess that turns out to be for the best.
Let me just say this…I didn’t want to put this book down…Once it started getting juicy, I just couldn’t pry my fingers away from the book. Larissa Ione, I don’t know how you do it…but your Series is becoming even more addictive.  =)