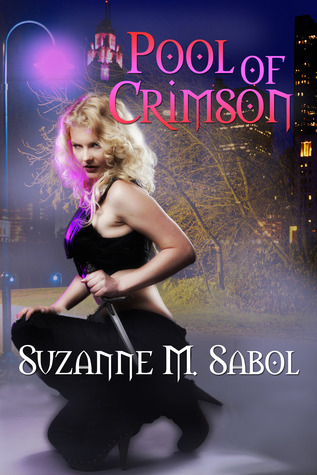 Pool of Crimson is the first book from Suzanne M. Sabol’s Blushing Death series, and I’m so glad I was able to be apart of the blog tour for this book. I was introduced to another author through Paranormal Cravings Books Tours and brought back to reading one of my favorite genres, Urban Fantasy.

In Pool of Crimson, readers are introduced to the main character, Dahlia who reminded me of Buffy the Vampire Slayer because she is a killer of the undead. She’s the feisty, kick-ass female character that supernaturals are scared of and she’s on a mission. She needs to know why the Master vampire, Ethan wants to raise a demon from hell, and she has to figure it out by putting herself into sticky situations. In the mince of dealing with what the Master Vampire has up to his sleeves, she is dealing with Ethan’s second in command showing interest with her. She can’t stop herself from being intrigued by the second in command as well. Life is going to get even trickier when she realizes she’s something that interests a lot of the supernaturals, but she has no idea why.

Suzanne opened up her series with a bang by having the novel start as action-packed in the first chapter. There’s no slow build-up with the action because Suzanne puts Dahlia through a lot in Pool of Crimson. She also opened the series by introducing each of the characters that will play a role in the in the series. I loved every bit of how the story unfolded from the beginning to end because it kept me flipping through the pages in my Kindle.

I adored Dahlia’s character because she reminded me of my favorite 90s-00s character in Buffy the Vampire Slayer. She was kicking butt a lot in this book, even when she was scared out of her mind. The best part about Dahlia is how she gave the supernaturals nicknames and some of the nicknames were crazy fun. (I love when humor is thrown in a book, even when it’s supposed to be a nerve-wracking scene) The only thing that bothered me was how swiftly the ending happened. I was expecting a little more with the climax of the story. Maybe I just wanted Dahlia to give a slow pounding to the evil guys in the book. They deserved it after what she went through. (Oh…but one particular scene was great she earned to give a certain someone a good butt-kicking) The epilogue did give a sneak peek on what is going to happen next to the characters. =)

I give this book 4 full moons and recommend it to Urban Fantasy readers out there. If you miss the show, Buffy the Vampire Slayer (like I do), you’ll need to check out the first book to The Blushing Death series.

I look forward to diving into the next book to find out what Dahlia has to deal with next. She’s one character that doesn’t let a bad day get to her.