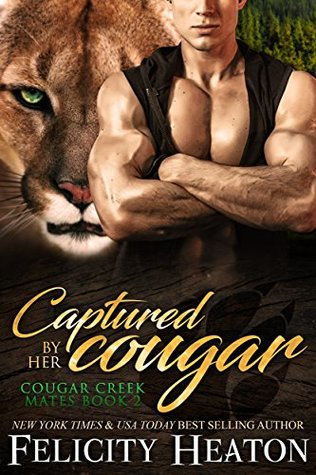 It’s back to Cougar Creek in Captured by Her Cougar. This time it’s Storm in the spotlight in the series, and he’s the complete opposite of Rath. If you read Claimed by Her Cougar, you’ll find that Rath is one of the country cougar shifters of the family, while Storm is the city cougar shifter who doesn’t want anything to do with Cougar Creek. He’s only at the Creek to assist his brothers during the mating season to make sure to break up any fights that happen between the male cougar shifters over the female cougar shifters. Although, now he has another mission and that is to keep the prisoner Gabriella contained in his cabin until she tells them that she isn’t with Archangel.

Unfortunately, Storm is getting nowhere with her. She’s persistent she’s not with Archangel, but he doesn’t believe her. He’ll do anything to get her to ‘sing,’ but unfortunately, his fiery attitude is not helping. It doesn’t help either when Gabriella has the same fiery attitude.

I love these two together, especially with all the bickering and tension between the two. They both are the perfect match for each other, even with all the drama going on between the two. Gabriella knows how to handle the problematic cougar shifter. Storm though has no idea how to handle her, especially when he realizes that he’s falling for her. There’s also the issue of everything happening in the mating season and how the other cougar shifters feel about Gabriella being there. So much is happening that you do not want to miss out on reading this novella.

I don’t want to give too much away from the storyline because this a quick novella to read. It didn’t take me long to finish reading it. This has become my favorite so far in the series until I read Flint and Cobalt’s stories. Although, I did get a taste of these two in this book. I may end up enjoying their books more, but right now Storm wins it for my favorites. Some readers may not like his attitude at the beginning towards how he treated Gabriella, but in the end, he will win you over. 🙂 Gabriella also changes her ways at the end too. Like I said before, these two are perfect for each other.

I give the second book in the series 5 stars and highly recommend this book and the series to PNR readers. I recommend reading the first book first though, so you can read Rath’s story and also find out what happened to have Gabriella become a prisoner to Storm.