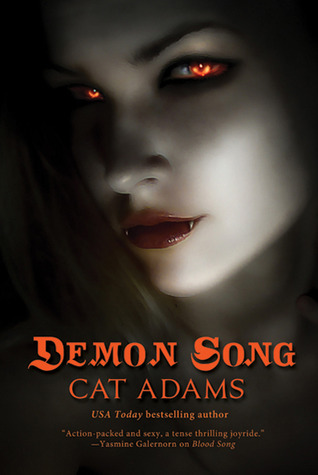 My Review:
(Originally Reviewed on Mrs. Papillion aka “The Book Worm”)
I’m so glad I came across this author among the many other authors at the Library. “Demon Song” has become the best of the books in the Bloodsinger Series. I could not put this book down one bit. I would get upset at night when I would be too tired to go on, or my daughter would make me put it down to help her with something. I’m in love with the characters even more. I’m fascinated now that Celia is in a love triangle…not with just Bruno, John Creede…but also with a sexy Medic who she came across in the first chapter of this book, Christopher Gaetano…who only played a small part in the book. I have a feeling though he’ll show up more in the next book. Yum!!
From the beginning of this book to the end of this book I was intrigued. The book picks up from Siren Song and may I say Cat Adams leaves you hanging at the end of this book. Ugh!!
I loved the storyline in this book. Celia has to still fight her craving for blood. She doesn’t want to become a full vampire. She also has to continue her job as a bodyguard and also solve crimes. She has to find out why a state facility is making shifters/werewolves go crazy. When she does find out the truth, it’s a scary one. Remember that demon from the first book well, he’s back, and he still wants Celia. That is when Bruno comes back in the story. The best part of the book was when she had her first close love encounter with John Creede. Holly Molly!! And it wasn’t even a sex scene, and he had her to her knees. He’s a Mage with some serious SKILLS. That’s all I’m going to say. I won’t spoil the story..but all I can say is if you haven’t read this series and you think the first two books are not for you…you should at least try Demon Song.
I’m looking forward to the next story that Cat Adams has written about Celia and her friends….and of course her lovers.
I’m ready for the release of “The Isis Collar” already.  =)