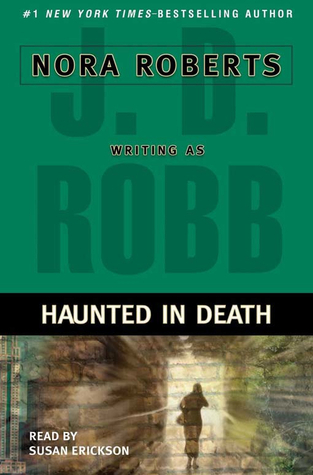 Number Twelve is an urban legend in 2060 New York City. The hot club in the 1960s, it is now reported to be haunted?and cursed. Lieutenant Eve Dallas is called there to investigate the apparent murder of Radcliff Hopkins, its new owner and the grandson of the man who made Number Twelve a cultural icon. Several bullets from a banned gun end his dream of returning the building to its former glory. With everyone around her talking about the supernatural, pragmatic Eve won't let rumors of ghosts distract her from hard evidence. The case becomes even more bizarre when it appears to be linked to the suspicious disappearance of a rock star eighty-five years ago. As Eve searches for the connection, logic clashes with the unexplainable. She may be forced to face the threat of something more dangerous than a flesh-and-blood killer.

Haunted in Death is a quick novella in J.D. Robb’s In Death series. It would be a perfect reading during October since it has a spooky theme. This time around, Eve and her team have to investigate a murder in a supposedly haunted club. Although, Eve doesn’t believe in ghosts, and she won’t let it distract her from investigating the murder of Radcliff Hopkins.

Storyline/My Thoughts: I will to keep this review short since Haunted in Death is a novella. I do not want to end up giving anything away.

I only gave this novella three stars due to how quickly the case went and closed. There was also the issue of the paranormal elements in the book. I had to agree with Eve when it came to a haunted club. It didn’t feel believable, especially after Eve realizes something else about Radcliff’s murder that comes to light in the story. I wish I would’ve enjoyed this story a little more. Maybe if it would’ve been a full-length novel instead of a novella, I could’ve liked it better. I did enjoy certain parts of the novella. Eve and Roarke always make books better for me since their relationship is perfect. I also love Eve and Peabody’s conversations with each other. They sometimes agree and sometimes don’t. In this case, Eve didn’t believe in ghosts, but Peabody did.

Overall, this novella was an okay read for me, but it didn’t live up to the other books/novellas I’ve read in the series. Now, to move on to the next full-length novel in the series because I’m determined to catch up on this series by J.D. Robb.

Standalone or Part of Series: It’s part of the In Death series, and I recommend reading in order.

Would I recommend this book? Yes. If you enjoy Romantic Suspense and are a fan of this series by J.D. Robb.