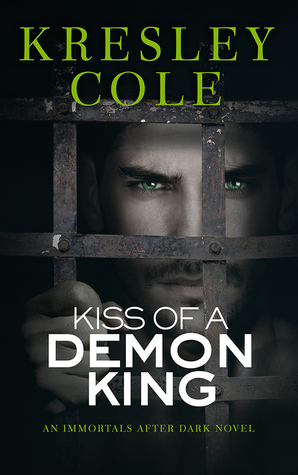 Kiss of a Demon King is the sixth book to Kresley Cole’s Immortals After Dark series. This would be my third time reading this book. I read it the first time in 2014 and then again in 2019. I’m re-reading the series since the next book, Munro releases in January 2022. I needed a refresher of the series since it’s been a while. I love re-reading this series. I always fall harder for Kresley’s characters in this world.

Storyline/My Thoughts: First, I realize this book is a lot of readers’ favorite, but unfortunately, this has to be one of my least favorites. It’s not just because of the female character Sabine, but also because of Rydstrom. There’s also the issue of Omort the Deathless in this book. There are villains you hate, but there are villains that are sick and twisted, and this one was sick and twisted. I felt ill the whole time with him in the story.

Here’s the gist of the story without giving too much away. If you had read Cadeon’s story before this book, you would’ve found out that Rydstrom was captured by a so-called damsel in distress who was the Sorceress of Illusions, Sabine (She’s the half-sister of Omort the Deathless. Omort is the one that stole the crown from Rydstrom.) Sabine now has Rdystrom in the dungeon of his castle in his kingdom. She’s on a mission to get pregnant by Rydstrom by his baby and be the Queen of his kingdom. There’s also something else in the story that needs to happen that Omort needs for her to do. Omort does not like that his half-sister has to sleep with the Demon King. This is when the readers find out that Omort has feelings for Sabine. There’s also something that Omort does to Sabine and her sister that is unforgivable, and I find it very disturbing. I hated this part of the book. This was at least one thing I aligned with Sabine in the story and wanting revenge against Omort. I could not stomach Omort and found him disturbing. He is the worst villain in the series (at least so far).

Here’s the thing that bothered me about this book, though. Rydstrom changes when he becomes captured due to how Sabine tortures him. (Cadeon and Rydstrom changed personalities, and you can tell within this book.) There’s also the issue that he knows she’s his fated mate. He’s fallen for her, but Sabine doesn’t want to fall in love. I can understand, though, because Kresley goes into detail about some of Sabine’s past and why she is the way she is, and there is her sister she loves dearly. I couldn’t connect with Sabine, though. I couldn’t connect with Rydstrom, too, especially towards the end of the book, when Sabine was trying to get back to her sister. There are some scenes between both the characters that are disturbing. I sometimes thought they shouldn’t be fated mates. Although, in the end, I could understand why they were fated mates after everything happened. They actually were made for each other in a weird kind of way. I’m glad, though, that Sabine and Melanthe have a strong relationship as sisters, and you get that in this book.

I was more excited that Cadeon and Holly appeared in the book, and there was a follow-up to their book. Rydstrom was surprised to find out the news of Cadeon and Holly when he didn’t want revenge on his fated mate, Sabine.

The question is if Rydstrom will get his crown back in this book? You’ll have to read it to find out. He definitely didn’t have it easy getting it back, and he should be very thankful for what his brother had to go through to get the sword from Groot.

I give Rydstrom and Sabine’s story 3.5-stars. It may not be my favorite because of the characters, but I still enjoyed the storyline. I really liked the ending.

Would I recommend this book? Yes. If you are a fan of PNR, then I recommend the Immortals After Dark series. Kresley Cole is the Queen of Paranormal Romance.