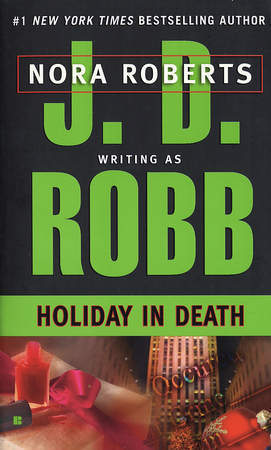 IN A FUTURE WHEN COMPUTER TECHNOLOGY BRINGS LOVERS TOGETHER, DATING CAN BE A DEADLY GAME...
No one likes to be alone during the holidays. And for New York's most posh dating service, Personally Yours, it is the season to bring lonely hearts together. But Lieutenant Eve Dallas, on the trail of a ritualistic serial killer, has made a disturbing discovery: All of the killer's victims have been traced to Personally Yours. As the murders continue, Eve enters an elite world of people searching for their one true love - and a killer searching for his next victim. A world where the power of love leads men and women into the ultimate act of betrayal...

I finished listening to Holiday in Death by J.D. Robb, finally. I’m behind on my In Death Read A Long Challenge, but I’ll get there.

It doesn’t surprise me that Eve, Peabody, McNab, Feeney, and Roarke have to deal with solving crimes during the Christmas Holiday. Crime never sleeps. This time though, they are looking for a killer in a Santa Claus outfit. It’s up to the crew to find the killer before he or she strikes again.

Poor Eve is putting herself in harm by not letting herself sleep and heal from her past experiences. Roarke is worried about her and puts his foot down with her several times in this book. I love Roarke even more on how he cares for her and puts up with her.

I did kind of figure it out who the killer was eventually because of where J.D. Robb was having Eve and Peabody go in the story. J.D. Robb knows how to write some horrible villains in her novels, which is why I love her books. Even though I figured out the villain in the story, it didn’t stop me from reading the seventh book.

There was a moment in the book where Eve and Peabody had some issues with each other. I was not fond of that because I love these two together and didn’t want them to have a falling out. They made up at the end of the book. Thank goodness.

There was also McNab in the story. He has a thing for Peabody, but they have a hate relationship with each other. I hope to get more of them in the next upcoming books. He has a smart mouth, which is something I like about him. He drives everyone crazy.

Overall, this book gets four stars from me. It may not be my favorite, but I still enjoyed the storyline. I look forward to reading the next book in the series and the next and next. I have some catching up to do and eventually will get there.

If you are a fan of Romantic Suspense, then I highly recommend this series.